Big Sister is watching you — official

Stella Rimington, who is the Director-General of what is laughably called The Security Service (in short, the spying game) has spilt the beans regarding the 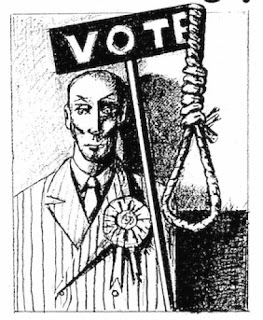 dirty work of these government-funded low-lives who earn their salaries by spying on workers considered to be dangerous to the ruling class.

In her 1994 Dimbleby Lecture Rimington provides a definition of subversion which is most instructive: “activities intended to overthrow or undermine parliamentary democracy by political, industrial or violent means”. Now, socialists intend to overthrow so-called parliamentary democracy. Our aim is the democratic establishment of full economic democracy. And we intend to achieve this through democratic political means. This, according to Rimington’s definition, is subversive.

So, what do the spies have in mind for subversives? Rimington’s lecture was chillingly candid:

“The Service set out to identify all the members of these subversive groups and to investigate their activities . . . With the proper legal authority, we may need to tap their telephones, open their letters or eavesdrop on their conversations to find out their intentions. We may have to observe their movements secretly, or recruit members of those organisation as agents to tell us from the inside what is being planned.”

Feeling paranoid? Not as much as they are. According to BOSS agent, Robin Ramsay (in an interview cut from a 1981 Panorama programme, but printed verbatim elsewhere), “British intelligence has a saying that if there is a left-wing movement in Britain bigger than a football team our man is the captain or vice-captain, and if not, he is the referee and can send any man off the field and call our man on any time he likes” (Perspectives, issue 8). Who is to know how many of the leaders of the leftist sects are paid confusionists appointed by the state? We have often said that certain left-wing parties have done so much discredit to the cause of socialism that the ruling class could not have done a better job. Perhaps the ruling class have sometimes been doing the job.

Incidentally, these spies are not totally stupid. At one point Rimington mentions that it was “state capitalism” which many of the leftists were on about. And is it quite right that for most of this century many of those calling themselves “socialists” or “communists” (with the unqualified exception of the Socialist Party) were not actually opposing capitalism, but supporting a different version of capitalism, often identified with overseas dictatorships.

As far as this party is concerned. Big Sister and her spies are welcome to observe us. Indeed, we hope that they will learn something about the nature of society in the process. We are a party without leaders. So, they can infiltrate who they like into our ranks (as long as they convince us that they are socialists) and preferably send their spies out to sell this journal for us because somebody has to do it. Unlike the conspiratorial Leninist would-be vanguards, we have no secrets from the working class, so there is nothing worth bugging in the Socialist Party. In fact, in return for a generous donation, we can post our conference minutes and other fascinating documents directly to MI5, with free leaflets explaining the case for socialism to spies looking for a way out of a lousy job.

Down with justice!
The new Criminal Justice Bill is a piece of vicious legislation enacted by legalised criminals in the interest of injustice. The basis of property ownership is nothing less than the legally enforceable right of a small class of thieves (less than five percent of the population) to monopolise the earth and its resources at the expense of the wealth-producing majority. Any laws passed to solidify this freedom of thievery is deemed by them to be Justice; offenders against the holy law of property power are called Criminals. Hence the Criminal Justice Bill.

The Bill, which will give sweeping new powers to the police against workers in conflict with the rights of property, is another in a long line of attacks upon the ever-limited freedoms of the working- class majority in society. The powers given to uniformed boot-boys (themselves working-class mercenaries, of course) against homeless people who squat in unused properties or occupy available land will result in more misery and poverty for wage-slaves who have refused to knuckle under the conventional property code of the system. In truth, the idea of beating capitalism by squatting in empty houses (usually slums) or retreating into some ill-defined and rather uncomfortable “New Age” has always been a non-starter; but now the state is out to teach these workers just how unfree they are.

The new law contains fresh powers to control and suppress free assembly, including the rights of police to close down public gatherings of workers. Our rulers have never liked the idea of workers meeting together; our collective intelligence has always been a threat to them. In the last century they passed the infamous Gag Acts, laws forbidding more than six workers to meet in one place without the permission of a magistrate, and Sedition Acts which made it a conspiracy to advocate workers’ freedom. In 1819 they showed their democratic credentials when they massacred a peaceful crowd gathered to defend free speech in Manchester: the British Tiananmen Square. The new law being introduced now, which is partly the opportunist creation of a desperate Thatcherite Home Secretary who is anxious to keep his job by appealing to the class-spite of his party supporters, is no more than a continuation of the British state’s long-standing antagonism towards democratic freedoms for workers.

Capitalist democracy is something of a joke. Their justice is a sick joke. And when a class which has stolen the wealth of the world and spat on the liberties of the wealth-producing majority lectures us about threats to democracy and justice we are determined to be more openly subversive to their system than ever.