Between the Lines: chasing the dragon

Chasing the dragon
Aaah! Just when you thought it was safe to come out in the dark, she’s back . . . 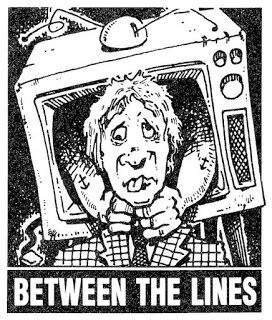 and Nicholas Broomfield was out to make a documentary about her whether she wanted him there or not. (C4, 9.30pm, Thursday, 19 May.) The subject in question is Margaret Thatcher, a one-time Prime Minister who said that there was no such thing as society. See the Postcards from Hell on other pages for a more vivid guide to her preferred habitat. Broomfield, who is used to following around confirmed fruit and nutcases (it was he who made that superb documentary about the mad Boer, Terre Blanche), was as welcomed by the Thatcher groupies as a cockroach at a cocktail party. It Is good to see just how small and foolish “the mighty” really are.
In the same week the BBC was chasing the story of the Chinese political prisons where countless detainees are locked up for speaking out against the government. Down at the BBC they have no need to lock up the journalists who are vetted by MI5 before they can have a job and then only allowed to interview those whose words have not been banned by government edict. That’s what they call capitalist democracy, that is. On Newsnight (BBC2, 10.30pm, Wednesday, 18 May) Jeremy Paxman interviewed a smarmy businessman who insisted that human rights abuses should not interfere in commerce. Paxman put it to him that to trade with a state that can do this makes him and his fellow capitalists collaborators. Quite so. And what’s new about that? When have a few camps filled with tortured victims ever stood in the way of a healthy profit? Perhaps next time Paxman interviews Douglas Hurd he would care to ask him whether as a major arms-seller to Indonesia his government feels just a tiny bit like collaborators in the slaughter of the people of East Timor.
What’s all this then, Arfur?
ARFUR: ‘Ang on Phil, I’m reading this ’ere election manifesto.
PHIL: Reading? You goin’ soft or something Arfur?
GRANT: You want me to sort him, bruv. That’s how we do things in the East End see. We put the boot in first and ask questions later. Right?
ARFUR: It says ’ere in this ’ere Socialist Party manifesto that all politicians are out to take us for a ride. Now, I’m only a simple bloke, as you well know, but 1 can’t ’elp thinking that they might have a point. What you think Michelle . . . I mean, you’ve been to that there university, ’avn’t you?
MICHELLE: Well, according to what I’ve been reading this totally leaves out of account the post-modernist critique of metatheoretical discourse. I mean, haven’t these socialists ever read Lyotard? Anyway, I’m off to tell my daughter that’s she’s really my cousin.
GRANT: Yeah, and I’m off down the Arches to sort out some geezer with a shooter who reckons Minder was just a comedy.
[Enter an old drunk with a blue suit and a political rosette who looks a cross between that dodgy lawyer used by the Mitchell Bruvvers to get them off at their last court appearance and at least half the members of the House of Commons]
SWINDLER: Hello there, jolly working folk. I’m your candidate . . .
ARFUR: Ah, perhaps you can ’elp us. I was just reading this Socialist stuff about the likes of you being a lot of useless leaders. They reckons ’ere that the emancipation of the working class can only be the . . .
SWINDLER: Put it away, my good friend. Subversive nonsense. Pure idealism. You can’t run your lives without us. Any chance of a G and T?
PHIL: You saying we can’t run the world without being led by a load of old duffers like you?
GRANT: Want me to sort him, bruv?
SWINDLER: No . . . what I’m saying is that the likes of you — decent working chaps that you are — need the likes of me — educated at Jesus and the bar, you know — to do a few things to improve life for you. A couple of new beds in the local hospital, for example. And free chiropody for all those of ninety-five and over. Jobs for everyone . . .
ARFUR: Well thank you very much indeed. I’ll put this socialist stuff away right now. And buy this man a large G and T on me.
DOT: Did somebody mention Jesus?
BIG RON: Did somebody mention a late bar?
MICHELLE: Oh, hasn’t anyone ever told them that they’re just pathetic caricatures of workers invented by people who drink in wine bars. No wonder they’re stupid enough to be taken in by another bloody politician.
Steve Coleman