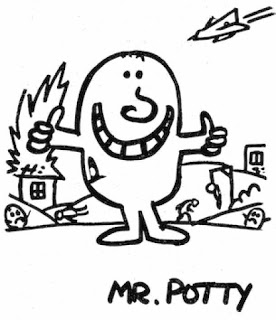 pleased with himself. The birds were warbling, the flowers were growing, the brook at the end of his garden was bubbling. He glanced at it apprehensively as he crossed the little bridge. Yes, it was definitely bubbling. He shrugged and went on, putting it from his mind. Today was, after all, going to be a very special day.In the village the shops were gaily decorated and people passed to and fro, happily chatting with the shopowners. PC Mungo, the village bobby, paced grandly along the street wearing the shiny new medal he’d got recently for catching Mickey Flynn, the notorious criminal who had let off fireworks while the council was in session. Mr Potty nodded and exchanged a friendly word or two as he passed. He noticed that PC Mungo’s truncheon seemed to have red paint all over it. but he let it pass.

Today was going to be exciting, thought Mr Potty. Mr de Beergut. the inheritor of the entire firm of Beergut, Slugworm and Fester had asked to see him, him, personally, at nine o’clock sharp this morning. Mr Potty knew it would be good news. After all, hadn’t he worked in that same chemical factory man and boy for thirty years, and had he ever had a day off sick? Only yesterday his manager had said to him: “Potty”, he said, “this firm really needs men like you, you know. Can’t think where Mr de Beergut would be without you”, and Mr Potty had blushed, too tickled to reply.

At the end of the High Street Mr Potty saw smoke. As he came closer he saw the Mungo boys in the road. Jimmy was holding a petrol can, and Billy was throwing matches at the grocer, who was tied to a post. Mr Thoms the grocer was cross. He didn’t like being tied up and set fire to. Freddy, who had just finished looting the till, was busy torching the premises. Mr Potty decided this was very naughty, and looked around for their father PC Mungo, who was nowhere in sight.

“Billy”, he said, “don’t you think you should stop this?” Billy, who was a very naughty young man, said: “Fuck off, or I’ll have you arrested”, and waved a stick at Mr Potty. Mr Potty decided they would grow out of it, and so went on his way, worried slightly about the way the Mungo children seemed to like murder, rape and arson better than nice games like football and tennis, but determined not to let one dark cloud spoil a beautiful blue sky.

Mr Potty was passing through the fields, on his way to the factory, when the bomber squadron flew overhead, on their way to the war. He stopped and waved to the dark aeroplanes, but they were very high and probably couldn’t see him, or they would certainly have waved back. They were just off to drop some bombs, and would be back in time for tea and buns at six o’clock. They were jolly chaps, always singing and laughing in the village teashop. Mr Potty was glad the weather was nice for them.

Suddenly he spied Old Gypo Williams coming towards him. and he sighed. Old Gypo was bound to ask him for tenpence, just like he did every morning at this time. Mr Potty put a brave face on, and dug his hand in his pocket.

“Well thank ‘ee Mr Potty, that I will, and right kind of you it is to pass 0.000000001 percent of your earnings to the poor and undernourished of the world. You ain’t ‘eard about poor Mickey Flynn the renegade Irish firework criminal then, Mr Potty?”

“Stone dead, ‘e is, found in his cell last night. Got it from the cleaner. ‘Parrently bashed hisself to death with the leg orf a chair when no-one were looking. Right terrible, don’t yer think, Mr Potty?”

Mr Potty agreed that it was very sad, but Old Gypo continued in his monologue: “His old man reckons he weren’t even in the country when them fireworks was let orf. Seems ‘e were in Mozambique doin’ Volunteering Service or someink. Reckon they’ll like as not be taking PC Mungo’s new shiny medal orf of him afore too long. Fact is ’e might get the boot altogether if the papers gets old of it, an ‘im wiv two rottweilers to feed an’ all. Bleedin’ shame.”

“Well, must be off, Mr Williams, got lots to do you know. I’m to see the owner of our whole firm this morning, and I know it’s going to be good news.”

Old Gypo raised his hedgehog eyebrows, and then scratched his beard thoughtfully.

“Yer well, maybe it’s eleven pence I’ll be stickin’ you for tomorrow, in that case?”

And then he gave a great big guffaw and slapped Mr Potty on the back, enjoying his joke.

Mr Potty went on his way in fair spirits, despite the news of PC Mungo’s impending embarrassment. Old Gypo was a good sort, always concerned for other people’s troubles more than his own, and never complaining about having to sleep in a pig trough and eat boxes.

Finally he arrived at Factory Lane. It was a good factory, and lots of people worked there from the town. As he walked up to the back entrance he saw a huge car parked at the front with a chauffeur standing by it. What a beautiful car it was! He knew he would never own one like it, because he wasn’t really clever enough to own his own factory even if he was chief cashier. Mr de Beergut must have arrived already, he thought, better get a move on. As he passed the effluent disposal plant he noticed that the river was now bubbling and smoking, but he decided that this was only because of spring tides. He entered the office with great excitement. Mr de Beergut was waiting.

“Potty, it’s a pleasure to meet you”, began the other, and Mr Potty felt himself glow right down to his toes. “Sit down, sit down.”

Mr Potty sat down. He knew today was going to be a good day. For a moment he thought he could still smell the fumes from the river, but he decided instead that is was probably Mr de Beergut’s famed gourmet diet that was responsible. The owner looked down at him, man to man.

“Potty, everyone here works hard, but especially you. Your persistent ten-hour days have not gone unnoticed, let me tell you. Your efforts have been brought to the attention of the Board, and there’s something they have asked me to give you.”

Mr de Beergut had paused to consider him, then he thrust out a large pink hand and. taking Mr Potty’s limp white fingers, wrung them till they cracked.

“Our congratulations, Mr Potty, and thank you for everything. Keep up the good work. Have a cigar.”

Mr de Beergut planted an enormous Havana in Mr Potty’s breast pocket, and immediately swept from the room to go to a financial planning meeting.

Mr Potty stood up, looking speculatively at the cigar sticking out of his pocket. It seemed rather a shame that he didn’t smoke. Ah well, he thought, brightening, it’s all in a day’s work. And off he went to his desk, determined that today was going to be a jolly nice day come what may, and nothing was going to spoil it, nothing at all. Not even the smell of the river as it boiled and spat its way past his window.