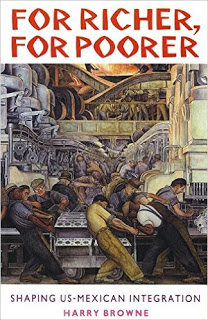 For Richer, For Poorer: Shaping US-Mexican Integration. By Harry Browne. Latin America Bureau. 1 Amwell Street. London ECIR 1UL. £7.99.
As this small book (128 pages) demonstrates, we are now witnessing the rapid globalization of capitalism. This is particularly noticeable with regard to Mexico and the United States. Whatever the future of the North American Free Trade Agreement (NAFTA), the US and Mexico are involved in an unstoppable process of economic integration, thus reducing the importance of the Mexican-US border.
More and more American corporations are building factories not only just south of the border, but also in central Mexico as well. The Mexican workers are given a few days training and. inevitably, the turnover of labour is high; but, despite previous assumptions, many Mexicans soon become expert in high-tech processes such as computer production and assembly. And with Mexican workers’ wages around one-tenth of those of US workers in say, Detroit, the employers have not only been able to play one set of workers off against the other, but have shifted production from the north to the south, thus causing unemployment among many US workers. This has caused considerable headaches for the already weakened American unions, mostly affiliated to the AFL-CIO. Unions generally fight a losing battle under capitalism much of the time anyway. Most of the Mexican workers either do not belong to labour unions, or they are enrolled in ones largely controlled by the Mexican government. Either way, this is resulting in increasing profits for American and, to a lesser extent, Mexican companies.
In this book Harry Browne explains the nuts and bolts of the globalization of capital, particularly as it affects Mexico and the United States and. to some extent. Canada and the Pacific Rim countries; and its effects on the producers, the working class of those countries.
Peter E. Newell