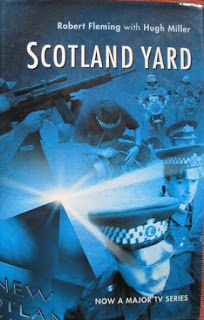 385pp, £14.99.)
Largely based upon material collected for the Channel Four TV documentary series, “Scotland yard”, this is not a particularly well-researched. In the main, various senior police officers describe their departments and squads, all of which tends to make the account something of a whitewash.
It is not so much what they say, however, as what they omit. There is not a word about the infamous Stoke Newington “nick”; and the only reference to corruption is the following comment by Commissioner Paul Condon in the Introduction: “There is an awareness that corruption was about . . .  I honestly believe now that that corruption has gone. There may be the odd bad apple, but the feeling that there was a bit of institutional corruption around, that has gone, thankfully”. Obviously, Commissioner Condon doesn’t spend a great deal of time in Hackney.
Nevertheless, despite its shortcomings, Scotland Yard provides a considerable amount of somewhat superficial detail on, for example, the Fraud Squad. Special Branch and its recent differences with the Security Service (MI5), the Anti-Terrorist Branch, the Royally Protection Branch, the Firearms Unit, the Mounted Branch, and even the Crime Museum and the Metropolitan Police Band.
We are informed that Lady Thatcher regularly has at least three armed detectives with her, and sometimes many more, including a female detective who keeps her revolver in her handbag. And according to Detective Chief Superintendent Bob Potter of “CE“ Squad (SO12 Special Branch), the fascist “Combat 18 is very small” and “they cause no problems”. He also thinks that it was unfair to blame the SWP for starting the Poll Tax riot in Trafalgar Square, in March 1990.
For me, Scotland Yard demonstrates not just the size (an organization of 46,000 people) and complexity of the Metropolitan (that is London) Police Service (no longer a Force!), but just how much of it would become unnecessary, and therefore, redundant, in a sane genuine classless, socialist, society of production for use and the satisfaction solely of people’s needs, instead of our present crime-ridden class society. After watching the TV series, Scotland Yard is worth a few hours’ read at least.
Peter E. Newell