Book Review: A Culture of Contentment?

The Culture of Contentment. By J. K Galbraith. Penguin 1993. 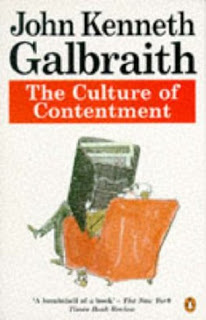 Professor Galbraith, the venerable centre-left economist, has written another book on American capitalism. Nothing surprising in that — he has written many previous such books on slightly different themes. The main theme of this one is that a majority of Americans who actually vote are contented with the way things are and will vote for the party that says it will make them pay the least taxes.

Galbraith sees this culture of contentment as supported by a number of attitudes and beliefs. The first is that the allegedly contented majority the four fifths living above the poverty line — believe they are receiving their just desserts and are entitled to be angry if anything impinges on what they so clearly deserve. The second altitude is short-termism: don’t pay out of today’s taxes for things that will only benefit people in the future.

Thirdly, the state is seen as a burden; measures to help the poor only sap their moral fibre and help to keep them poor. However, state measures designed to support the system or bail out unfortunate investors are acceptable (such as social security, military’ expenditure, guarantees to depositors in ill-
fated banks). Fourthly, the contented are said to be tolerant of great differences in income and capital: the plush advantage of the very rich is the price the contented majority pays for retaining what is less but is still very good.

Galbraith, a long-time supporter of the Democratic Party, expands on these themes with wit, clarity and convincing research. But never with even a hint that the whole lousy system can and should be changed. The mood in which he prefers to write is “analytical and not adjuratory, detached and not, as far as possible, politically involved”. Bringing news of capitalism’s excesses of poverty and riches, misery and privilege, Galbraith obviously has no intention of being shot as the messenger. His point is not to change the world but to “understand” it.

Galbraith invites us to be sceptical about claims that America is a classless society. Yet his own conception of the American socio-economic structure seems equally unrealistic. He recognizes a “functional underclass” of at least 12.8 percent living below the poverty line. But he makes no mention of any other class except the contented majority. In this latter group are a tiny minority of billionaires — and millions struggling to make ends meet just above the poverty line. Perhaps, like the equal right of rich and poor to sleep under bridges, all except the underclass have an equal right to be contented with the system. In his last chapter, entitled “Requiem”, Galbraith offers only a “sad ending”. The two main parties — and he could be talking here about either the USA or Britain — offer alternative administrations of capitalism to slightly different but heavily overlapping constituencies. The underclass is dismissed as powerless, despite its growing numbers. Is there really as much contentment as Galbraith would have us believe? He seems to doubt it himself, since on the last page he writes of “the present discontent and dissonance”.