During the recent general election much time and argument in the media revolved around the current economic recession. The Conservative Party claimed that recovery was under way as a result of government economic policy. The Labour Party claimed that the Tory government had caused the slump due to high interest rates. Kinnock failed to explain, however, why the economic downturn is developing throughout the whole of the industrialised world.

Much of the government-inspired rhetoric put over by the orthodox economists claimed that a consumer-led recovery was imminent. Norman Lamont actually claimed that the recovery had begun last June. The Bank of England in its Quarterly Bulletin claimed last November that “a modest recovery may now have begun” (Daily Telegraph, 15 November). A fall in inflation has been given as a sign that recovery is on the way despite the fact that inflation fell to almost insignificant levels during the slump of the 1930s and that downward pressures on prices are a feature of all recessions.

For many months the public have been subjected to a whole new terminology with the object of convincing them that the recovery is under way. We are now bombarded with terms such as “kick-starting” the economy. The commencement of the present economic downturn was denied and described as a “slowdown in growth”. When the facts emerged to indicate otherwise the term “soft landing” replaced the term “recession”. As the economy continued to deteriorate, as instanced by increasing numbers of personal and business bankruptcies and housing repossessions, it was conceded that there was a recession but it was argued that it would be a “shallow” one of short duration. Every time the economic indicators fail to indicate recovery the likely date for it is extended by six months.

A consumer-led recovery is a myth. There has never yet been one in economic history. Consumer upturns come last in the economic recovery cycle. The indicators of recovery that one would expect to see are: a rise in commodity metal prices such as copper, lead and aluminium; an increase in machine tool production; an expansion of the construction industry (factories, plant, etc). In the money market long-term interest rates on borrowed money would become higher than short-term rates—at present the reverse is the case, indicating a lack of confidence amongst capitalist investors in the longer-term economic prospects. 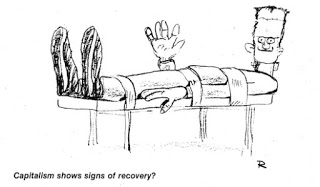 A fall in the number of net bankruptcies would be another indication that the slump is ending, but this statistic was removed from the Central Statistical Offices indicators under Mrs Thatcher and replaced by CBI economic forecasts; in other words, the employers’ view of the economy. An increase in job vacancies accompanied by a fall in unemployment are also signs of an economic upturn. Increase in housing starts usually occur some months ahead of a recovery.

It hardly needs emphasising that none of these indicators are at present positive. Unemployment is approaching 3 million. Business and personal bankruptcies have reached record levels according to Dunn & Bradstreet. and around 1200 businesses have failed each week during the first quarter of this year. Despite the budget car sales have failed to increase. Housing repossessions increased to over 70,000 last year compared to 44,000 in 1990 and 12,000 in the mid-80s.

Slumps are inherent in the capitalist mode of production based on the ownership of the means of production by a minority and where the motive for production is profit. The present economic crisis is occurring against a background of a fall in world trade throughout the advanced industrial economies. It is the longest crisis since the Great Depression of the 1930s. In terms of the housing market crisis, in the UK it is even worse than then. People have been conditioned to believe that rising prices are a permanent way of life, forgetting that this has only gone on since 1939 and that prices can come down.

At the same time we are witnessing a massive world-wide credit crunch commensurate with the colossal banking debt overhanging the world economy. This debt has been estimated at over $25 trillion weakening the banks in a way that has also not been seen since the 1930s.

Against this background the arguments of the politicians are irrelevant. It is significant that this potential banking crisis was not touched on in the election debate; neither was the cause of economic crises. Not understanding how capitalism works the politicians are reduced to frantically seeking signs of a visible recovery in place of the phantom one they insist is here but which defies identification.