Are you under age?

You are a young person, still at school or, perhaps, in a job-training scheme. As a rule, even with an election in the offing. political parties are not yet interested in you because you are not old enough to vote. Until then . . . well, it is generally assumed that you are not old enough to have any significant opinions of your own. Your parents, your teachers, clergymen and all the rest of the respected and respectable people you come in contact with will organise your thinking for you.
A lot of people will be critical of us for daring to intrude on your political innocence. It’s not really the done thing?! We will be accused of trying to take advantage of the young; of trying to indoctrinate you before you are mentally equipped to defend yourself.
Brainwashing
Yet, if you look back at your training and education so far, you might reach the conclusion that you have been subjected to the most rigorous indoctrination and brainwashing since shortly after you were born.
All the ideas you hold, ideas about behaviour, about religion, about politics, about leaders and leadership, about “your” country, about the totality of ideas and concepts that are moulding you into the same general type of social being as your parents, have been steadily infused into your consciousness since since before you remember.
The ideas and beliefs with which you have been conditioned might be good or bad or a combination of both. The fact is, however, that you are fed these ideas as absolute truths. They have been instilled into your consciousness in such a way as to form barricades against the intrusion of new ideas and new concepts that might possibly change your perspective on life and the way it is organised at present.
In fact, you have been programmed to reject any form of information or knowledge which might threaten the interests of those who have determined your conditioning.
A very simple test will demonstrate this. You are asked if you think it would be possible to have a world where money did not exist, where people would co-operatively produce all the things they need and require and simply take these things as and when they wanted them.
What is your reaction to such a proposal? Everything you have learnt from when you were a baby militates against such a proposal. You have been trained, educated and conditioned to think in terms of ownership, of possessions, of employment, of working for wages or salaries, of money and buying-and-selling. of greed and laziness. You reject the proposition out of hand with the same intellectual arrogance that our forbears might have shown when it was suggested that the Earth might not be flat!
The fact is that whatever spirit of enquiry is, or was, encouraged in you as a student is restricted to the requirements and the accepted pattern of society as it is now. You question the basis of the world you live in at your peril. At the risk of the wrath of parents, teachers and friends and, later—well, no employer will lack suspicion for someone who challenges the social “morality” of the way he or she gets their living. 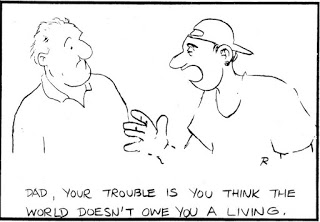 To question, to challenge, to think outside the parameters established in your programming, can be dangerous. The question is whether it is even more dangerous to become one of the undignified band of Accepters Anonymous who accept without question things as they are now— with all the very real dangers that ‘things as they are now’ entail for your future.
It is not our purpose to try to indoctrinate you. We reject the idea of leadership—something you have been taught to accept—and are not, therefore, interested in indoctrinating people to play the role of sheep. We do have very positive ideas about the source of the major problems that confront society; problems like poverty, insecurity, slums, violence, world hunger, war, but we do not intend to expand on these things in this short article.
Instead, we would like to ask you some questions. These questions are about the world we live in; they are about the problems that probably affected the lives of your parents and grandparents. The problems that, almost certainly, will have a marked bearing on your future unless you, and those like you. take active and urgent steps to abolish their cause.
Of the many questions we could ask, we will confine ourselves to the following. If you would like to send us your answers we will be pleased to comment on them. If you would like to receive our answers, we will be pleased to send them to you.
QUESTION 1 Governments of different political parties, Tory, Liberal or Labour, governments of the Right, the Left and the Centre, come and go in different countries. But all the basic problems remain despite the fact that political parties achieve power on the basis of their electoral claims to be able to solve these problems. Why is this?
QUESTION 2 In this country—indeed, throughout all countries—homelessness and slum dwelling is a permanent feature of life. At the same time, there are vast numbers of workers, skilled in the various aspects of building construction. Why are building and construction workers idle when millions of people desperately need decent homes?
QUESTION 3 In every country poverty, in one or more of its many forms, exists. Some 15 million children (averaging about 42,000 every single day) die every year of hunger and hunger-related diseases. At the same time, massive amounts of foodstuffs are dumped or stored—much of it until it goes rotten—and governments deliberately restrict food production. Why do you think this is?
These are just a few of the questions that might be asked about the contradictions that exist in this country and throughout the world. As you approach the time when you will have the power of your vote to endorse things as they are or bring about real change, we think it is important for you to address these questions.
In seeking answers, we would suggest that you ask questions. Ask your parents and teachers, ask clergymen, write to the Member who is supposed to represent you in Parliament and, of course, write to the leaders of the political parties. In the next issue of the Socialist Standard we will give you our answers to the questions we have posed.
And, of course, we will be happy to publish and comment on the answers you receive to our questions, especially those answers from political leaders, clerics and such others as feel competent to guide your thinking. They could make lively reading.
Richard Montague