Book Review: The Road to Tiananmen

China: The Search for Social Justice and Democracy. By Ranbir Vohra. (Penguin. £5.99.) 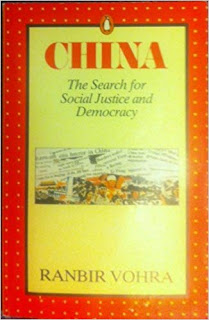 It is clear that this book was written in some haste to cash in on the demand for works dealing with the events leading up to the Tiananmen Square massacre in Peking in 1989. Vohra sets the scene by sketching in the history of China since 1850, but this means that he devotes too little attention to the 1989 events themselves. His two chapters on China under Mao Tse-Tung are obsessed with the figure of Mao and his ideas and plans.

But the sections dealing with developments since Mao’s death in 1976 are rather better. Vohra traces the economic reforms which meant a slackening of state control and a growth in overseas investment in China. This was accompanied by massive inflation and a rise in the urban cost of living. Agricultural policies designed to boost production in fact saw a fall in the grain harvest. Plenty of workers faced a drop in their standards of living, while new private capitalists flourished. Like most academics, Vohra places far too much stress on factions and divisions within the Chinese ruling circles as the dynamic for political developments. But it emerges that ordinary workers did not find the post-Mao polices an unmixed blessing.

The account of the 1989 protests is vitiated because attention is focussed on the student movement, with only passing references to the degree of support and participation by other workers in Peking. The claim that the events were “a part of the ongoing conflict between the Chinese Communist Party and the Chinese intelligentsia, each side representing a different view of modernization” is wildly misleading.

On the other hand, Vohra is right to point out that the protestors had no coherent political programme, and that there is no evidence of support among the overwhelming majority of the Chinese population outside the big cities. He is also correct when he notes that the Chinese government had had little compunction in the past about murdering its subjects. An estimated 80,000 were killed in the late 1950s. while, in 1976, several hundred were murdered . . .  in Tiananmen Square.

This is expensive for a slim volume with no illustrations, but it is an informative account. And Vohra as least realises that Marx was opposed to commodity production.