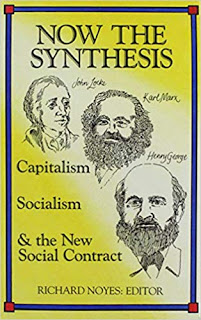 This collection of articles by a number of British, US and Dutch writers is an application of the ideas of Henry George to today’s world. George, a contemporary of Marx and Engels, argued that the existence of exclusive private property rights over land distorted the workings of laissez-faire capitalism. Abolish private property in land by taxing away its value and capitalism would work for the mutual benefit of capitalists and workers.

Ground rent is indeed a deduction from the surplus value that capitalist firms extract from their workers, but its payment to the state as taxes rather than to land monopolists like the Duke of Westminster, Harry Hyams, Gerald Ronson and the Queen would only benefit the capitalists and not the working class.

For a short while in the 19th century Georgism was a radical doctrine that enjoyed considerable, if misplaced, working class support. Today, as one of the authors documents, Georgist infiltrators have had some influence on the thinking of the Green Party whose “Community Ground Rent” is the tax on land values that George advocated. But Georgism, in preaching that there is nothing wrong with laissez-faire capitalism as such and that “everything would be alright if ground rent were paid to the state”, as Marx summed up George’s views (in a letter to Sorge, 20 June 1881), fits in very well with the free-marketeerism that enjoyed a passing revival in the 1980s. Indeed, this seems to be the general point this book seeks to make.