Myth of the leisure society

We are all obsessed with technology, from the Walkman on our heads to the 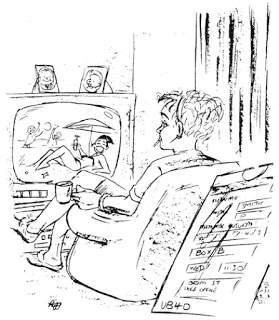 trainers on our feet. “State of the Art”. “High-Tech”, bits of glossy phrases; pieces of intellectual titillation. Technology is also presented as the cornucopia of unbounded plenty; the key to onward and upward progress, leading to a society in which work will get less and less, leisure more and more. This, of course, is no concern to the leisured class; they know not work and to them leisure is not news.

But the working class can be fair game. We it was who created the legend of Cockaigne; the imaginary land of idleness and luxury, so different from our life experience; who are only too ready to note any hint of leisure, in preference to working as employees. People believe what they take as their interest to believe. If you are given euphemisms for the otherwise unpalatable, you will come to accept the sugar-coating for the pill.

The essence of the growing emphasis on leisure is to be found in the greatly increased and increasing capacity of the productive forces, resulting from the now extensive use of sophisticated equipment. All. we may add, from the hands and brains of the working class. When Henry Ford said “History is Bunk”, he was expressing the naked capitalist principle that only tomorrow’s production and profits have any meaning, and that what you told people yesterday only subverts what you are going to tell them tomorrow.

Once upon a time, as all fairy tales begin, the working class was considered so lazy and indolent that they could only be made to work through threats of unemployment and starvation; a piece of moral turpitude given a suitable ironic twist when they were laid off: for working hard and swamping the market. Now we are even better at it; so much so, that we’re told the virtues of idleness. There is nothing new in capitalism using and constantly developing its technology of production; but it too is getting better at it.The Sunday Telegraph in 1979 (20 March) had a director of ICI stating:

No matter what the growth rate is in this country there is no way we are going to employ more people. The difference between a successful and unsuccessful business strategy in the modern world is the rate at which numbers of people come down.

Competition between capitalists for a bigger share of the market is the driving power to seek advantage in lower costs of production and distribution, through the use of machinery, or more effective machinery, and less labour. It is the nature of competition to allow no-one an advantage permanently, because in the race to keep the competitive edge, one capitalist organisation leap-frogs another. And so on, ad infinitum.There is nothing new to the working class in leisure. Traditionally though, it has been known as unemployment.

With what sort of logic, one wonders, can people look in wide-eyed admiration on something (made by their own hands!) that reduces their opportunity for access to the necessities of life.

To take one example of a “solution”, let us look at “work-sharing” proposed by Roger Clarke in Work in Crisis:

The general aim of work sharing as a social instrument is to so organise the volume of work available within the economy that all those wishing to work can at least find partial employment.
Work sharing can be achieved through some of those currently employed giving up their jobs to other groups of individuals or through a new arrangement of working time which allows the existing work to be shared by more workers (e.g. twinning and trebling arrangements).

Further on in his book, Roger Clarke notes that “work sharing does involve costs”. In other words, where is the money coming from to make up for the unworked, or “leisure”, time? His solution is that:

Those parties who are fortunate enough to have high earnings and security of employment . . . must expect to have to bear a considerably higher level of taxation which . . may be used to subsidise . work sharing . . .

It is not the fact (income tax is a book-keeping ruse to create the illusion that we have, as the saying goes, a stake in the country), but the thought behind this statement that is so outrageous. That the working class should always suffer in order to provide palliatives, protection and assistance for those who are responsible for our predicament in the first place.

So much for the cornucopia of unbounded plenty and progress. not forgetting “leisure”, of course.

The introduction of new technology will always create problems for those who produce the wealth of society until the means for producing wealth are owned in common and used to satisfy needs not make profits for capitalists. An impossible dream? Consider the following quotation which, with a nice touch of irony, Roger Clarke took from a book entitled God on Monday by Simon Phipps:

Politics may be the art of the possible, but what is possible greatly depends upon what people want. Small minorities with conviction and a good understanding of the way power operates, can create a new public opinion. When a new public opinion comes to want a change, the range of what is ‘possible’ changes too.

That is precisely what we Socialists are engaged in doing.