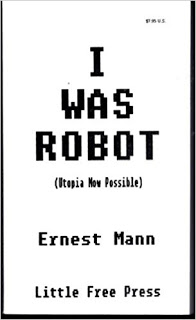 We have always argued that many workers would arrive at conclusions similar to those of Socialists on their own, without encountering Socialist speakers or publications. This is just what happened to Ernest Mann: twenty years ago, at the age of 42, he decided that he had had enough of wage slavery and “dropped out”. Since then, he has been propagating his ideas in his own newsletter, issued from Minnesota. Many of these newsletters are now collected together in this volume. Unfortunately, this format means the book is very repetitive, and there is little sense of an argument being developed. Nevertheless, the result is lively and well worth reading.

Mann argues that basic causes of problems should be attacked, not just the symptoms. For him, it is the pursuit of profit which is responsible for the ills of society—for gross inequalities, for the bloodshed of war, for the waste of production, for people’s need to obey and conform. His alternative is what he calls the “Priceless Economic System” which is a system without money or the profit motive, based on co-operation not competition, with work done by volunteers. He deals with the “lazy person” argument by pointing out that there would still be plenty of motivation to work in a society where people would be cooperating to produce the best possible, free of stress and worries. Without useless jobs and the waste of wars and so on. it would be possible to produce an abundance of goods, for people to take as they wish.

There is no doubt that the Priceless Economic System is in its essentials Socialism. The only sour note is struck by a passage leading to the conclusion. “let’s get rid of Profit and get our country back!”, which is based on the idea that the American economy has been in part sold out to billionaires from Asia and north Africa. The nationalism, indeed racism, of this argument, sits ill with the rest of this book.

The other problem in Mann’s discussion concerns how to establish the moneyless society. At one point he takes the elitist position that it will be enough to convince a few “movers and shakers” of its superiority, for then the rest of the population will follow them, apparently like sheep. At other times he suggests starting on an individual basis: give away your surplus possessions, set up a group of friends and neighbours who can donate labour and skills to each other for free. Then again he proposes that, once everyone is convinced of the need for the change, they can just set a date on which to stop using money. So he does (sometimes) see the necessity for majority support for a moneyless society, but he makes no reference to class struggle or the need to dispossess the capitalist class.

But the good points of the book far outweigh its shortcomings. There are some striking images, such as the opening one of workers all wearing helmets which somehow make them slaves of the bosses. Memorable too is the idea of the Warbucks family, who have ruled Earth for millennia but who eventually decide to leave for outer space, recommending to their slaves not to continue with the money system.