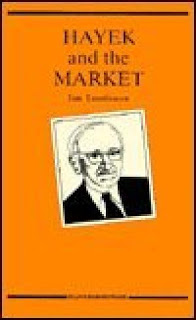 Hayek has been a notorious life-long opponent of socialism, and not just of socialism but even of relatively mild reformist and trade union attempts to improve working class conditions within capitalism.

After the publication of his book The Road to Serfdom in 1944 nothing much more was heard of him until he re-emerged in the 1970s to provide intellectual ammunition for the Thatcherite wing of the Tory party. So Tomlinson’s short, readable but expensive book can serve a purpose on the principle of “know thine enemy”.

An Austrian by birth. Hayek began his political life as a member of that country’s school of anti-socialism associated with the name of Ludwig Von Mises. Mises argued, that without buying and selling, money and prices it would be impossible to make rational decisions about what to produce and how to produce it; production solely for use and without monetary calculation was thus a mere pipe- dream. This was the argument against socialism. But the Mises school went on to argue that, even if buying and selling, money and prices exist, rational economic decisions would still not be able to be made unless prices were fixed by the free play of market forces. This was the argument against state capitalism and reformism (but which they also, either mistakenly or lyingly, called socialism).

Hayek’s main argument was directed at state capitalism and the concept of the central planning of all economic activity. He convincingly showed that the modern productive system was so complicated that it could not be planned from a single centre and that therefore some decentralization and autonomy for producers was a necessity. He went on to argue, however, that this made the market economically inevitable, an argument that is now accepted not only by open champions of capitalism like Thatcher but also by the likes of Kinnock and Gorbachev.

But this conclusion by no means follows, since why is it impossible to conceive of a system in which groups of producers would be responding not to market demand but to real demand as indicated by what people took under conditions of free access? Why could a system of production solely for use not be able to function on the same sort of self-regulating basis as the market is supposed to?

Hayek, however, ruled out this option in advance, arguing that there were only two choices: either free market capitalism or some form of statism. As he wrote in The Road to Serfdom:

The only alternative to submission to the impersonal and seemingly irrational forces of the market is submission to an equally uncontrollable and therefore arbitrary power of other men.