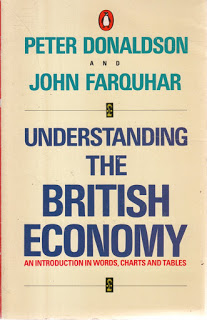 The authors, in their preface, explain that while the book is intended for the general reader they hope that it will be of particular use to students of economics at lower and higher levels. As a source of information the book serves that purpose well. It tells what has happened over a number of years to production, prices, wages, imports and exports, investment, unemployment and so on together with an account of government policies, backed up with a large number of tables and diagrams.

The authors decided that supplying this statistical information is not enough: “This would make very little sense . . .  if there were no explanations of the underlying concepts of economics and no consideration of the economic theories in which they appear”. So the book describes, for each problem, the different explanations as to its cause and the remedies put forward by different economists and political parties to solve it.

Economists do not often agree with each other about any economic theory. A rare exception was the body of doctrine put forward by J.M. Keynes. Most economists became Keynesian and in 1944 all the three parties in the wartime government — Tory. Labour and Liberal — agreed on operating a policy of “full employment” after the war. It did not last. The Keynesians had two policies, one for creating full employment, the other for preventing inflation. The first policy was to run a budget deficit, that is for the government to spend more than it raised by taxation and meet the rest out of borrowing. The second policy was to run a budget surplus, that is for the government to raise by taxation more than is spent and to use the surplus to pay off national debt. But what was the Callaghan Labour government to do in the years 1974-7 when unemployment and prices were both shooting up at the same time? They threw Keynes overboard and adopted that other spurious doctrine, so-called “monetarism” On this issue and on others where there are conflicting theories, the student has to decide for him or herself which is correct. not forgetting that they may all be incorrect.

Unemployment and inflation are cases in point. There are two opposite theories, both with a long history. One is that it is high prices which cause mass unemployment. In recent years this has been a constant theme in speeches by Thatcher and her ministers. The remedy, she says, is to get prices down or at least stop them going up. The opposite theory, held by many members of the Labour Party, was stated long ago by Pethick Lawrence, a minister in the Labour government in 1931, when they were faced with a huge rise in unemployment.

What causes inflation? Why is it that for a century before 1914 prices were stable while in the half- century since 1938 prices have gone up each year and are still going up? The authors describe some of the theories (pages 92-5). One is that if wages go up prices are bound to go up also. The experience of the years 1870 to 1914 shows otherwise. On average wages rose by 42 per cent but prices did not rise at all. They went down by 10 per cent. An inflationary rise of prices is caused by an excess issue of currency (notes and coins). Prices were stable in the 19th century because the Gold Standard prevented an excess issue of currency, as was explained by Marx in Capital Volume I (Chapter III. section 2C).

The authors state (page 93) that the 19th century theory that inflation is caused by “too much money” has been revived in the guise of “monetarism”. This is not correct. Gold standard theory and practice dealt with “money”, meaning only notes and coins. The modem “monetarists” deal in what they call money supply” which includes bank deposits. All of the several “money supply” indicators published by the Bank of England include bank deposits and in all but one of them the bank deposit element predominates.

Modern “monetarist” theory is based on a fallacious doctrine that the price level is wholly or mainly determined by the banks, through their lending operations. This was stated and accepted by the monetarist Milton Friedman in Free to Choose (1979. p.298). Ironically, since the popular view is that Keynesians and monetarists are in conflict, it was stated and accepted by Keynes in his Monetary Reform (1923. p. 178).

The last time the government used Gold Standard practice to halt inflation was in 1920 when the Bank of England was ordered to operate a policy of restricting the amount of currency in circulation. Millions of pounds of notes were burned, and the total of currency was heavily reduced. The result was that prices fell by 36 per cent between 1920 and 1925.

At any time in the past 50 years the government could have halted inflation by the same method. Instead they have chosen to increase the amount of notes and coin in circulation from £442 million in 1938 to over £14,000 million, an increase far in excess of what might have been called for by the growth of production and population. So that the price level is now about 23 times what it was in 1938 and is still rising. Responsibility for inflation rests with successive governments, Labour and Tory, and with no one else. It suits the interests of borrowers, and as the industrial and commercial capitalists are the chief borrowers, they have never put up really serious opposition to it.