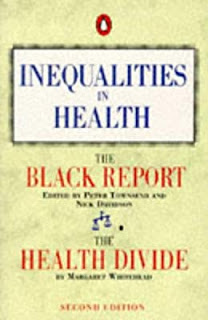 This book brings together the 1980 Report of the Working Group on Inequalities in Health (the Black Report) and the 1987 Health Education Council’s report. “The Health Divide”. The controversy caused by the Government’s heavy-handed attempts to restrict the distribution and influence of both will probably guarantee that Inequalities in Health will be much more widely read than publications of this type usually are, the Black Report having been available in only 260 duplicated copies when submitted to the Secretary of State. “The Health Divide” was published in March 1987 just after the government had announced the Council’s dissolution.

The Black Report examines inequalities in health up to the late 1970s. with international comparisons; regional differences in mortality; housing tenure and mortality; race and health; the influence of gender on health; and occupational differences in health A wealth of statistical data demonstrates conclusively that “At any age people in occupational class five have a higher rate of death than their better off counterparts” and “At birth and during the first month of life the risk of death in families of unskilled workers is double that of professional families” (p43). From the first month to the first year of life the gap widens still further, with deaths of male infants of unskilled manual workers three times higher than those of professional workers, and the ratio for female infants is higher still. The part played by bad housing, poor environments and poverty can be seen by the fact that accidents and respiratory diseases are responsible for the excess of deaths in infancy.

A fundamental principle of the National Health Service purports to be the provision of equal access to health care regardless of personal means, but the Black Report found clear evidence that people in higher income groups make better use of available facilities. Data Collected from other countries confirm the link between poverty and ill health: although greater resources allocated to maternity services and infant welfare have succeeded in reducing infant mortality rates in Denmark and Finland, a class bias remains.

A comparison between health inequalities today and in Victorian Britain prompts the Report to state:

Poverty is also a relative concept, and those who are unable to share the amenities or facilities provided within a rich society, or who are unable to fulfil the social and occupational obligations placed upon them by virtue of their limited resources, can properly be regarded as poor. They may also be relatively disadvantaged in relation to the risks of illness or accident or the factors positively promoting ill health (p107).

And even in old age:

To have secure employment and an above-average income when one is at work is to be better able to provide for one’s retirement. It is in this way that continuity in the distribution of material welfare is sustained. and inequalities in health perpetuated, from the cradle to the grave (p 125).

In setting out plans for improving health the Black Report is at its weakest because it fails to appreciate that capitalism functions by exploiting workers’ labour power and cannot be made to work in our interests.

“The Health Divide” is a shorter report that confirms and updates the evidence collected in the Black Report. It looks at the much publicised “North-South divide” and finds that, while there are higher rates of chronic disease in the North of England. Scotland and Wales, there are also marked regional variations: “In Sheffield, for instance, there was a difference in men’s life expectancy of over eight years between the most affluent and the most deprived wards’ (p247). It examines “life-styles” more closely than the Black Report and concludes that behaviour is less important than poverty in accounting for health inequalities. Smoking, for example, may help some working class women cope with their stressful workload.

In the years between the appearance of the Black Report and “The Health Divide” the problems of poverty and bad housing persisted, and grew even more severe for large numbers of workers. Research in the future will be more difficult because the Registrar General’s Office stopped analysing mortality rates for different occupational groups in 1986. to avoid the embarrassing conclusion that the health gap between rich and poor is widening The solutions put forward to eliminate health differences are similar in both studies and have no prospect of success whatsoever. The reforms of the past have eased some of the misery at the margins of poverty while allowing the system of exploitation to function intact; this book provides proof that capitalism is bad for our health without even considering its replacement.