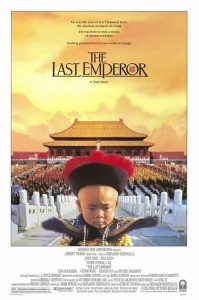 ‘The Last Emperor’ is a film about contradictions: the apparent omnipotence of Pu Yi, crowned emperor of China at the age of three and proclaimed “son of heaven” and Lord of Ten Thousand Years”, who by the age of six had been forced to abdicate without knowing it and has become a prisoner in his own palace. The contradictory arrogance of a child ruler who is, at the same time, a pathetic anachronism, overtaken by history. And the contradiction of a film that is rich in form but poor in substance.

The director, Bernardo Bertolucci, captures splendidly, the extravagant pomp and ceremony, the lavish but pointless ritual, the richness of costume and location as rank upon rank of luxuriously garbed, sycophantic eunuchs bow and scrape in the courtyard of the Forbidden City before a bored three-year-old more interested in chasing crickets than in his coronation. But, by focusing almost exclusively on the person of the “Last Emperor”, Bertolucci fails to address the reasons why this once omnipotent ruler has become a pathetic figurehead, first imprisoned within the palace, then driven out, becoming a puppet emperor of Manchuria with the Japanese ruling class pulling the strings, before finally ending up a prisoner once again, forced to undergo “re-education” in a prison camp prior to his being released to end his days as a gardener.

For, what this film is, perhaps unwittingly, portraying, is the ending of one social order and the ascendancy of a new one with its own ruling class of which the emperor is no longer a part. The imperial excesses and post-imperial agonies are brilliantly evoked. But what we are offered is spectacle, a series of lavish tableaux, with very little insight into the more interesting historical processes that underpin them.