Book Review: Poorest of the poor? 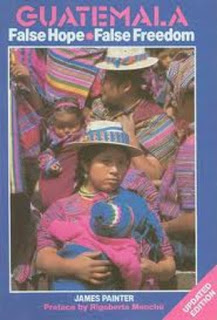 In his preface to this volume Rigoberta Menchú, a Guatemalan peasant leader, writes about the majority of Guatemalan people not having “the opportunity to develop and live like human beings”. This study examines the reasons that opportunity does not exist and suggests ways in which it might be achieved. To exist in Guatemala is to live in a country of violent repression, hunger and poverty. The country is a stark contrast between a minority living in luxury amid widespread destitution. The armed forces exist to defend wealth and privilege and aid in the repression which ensures their continuation. The emergence of a democratic government under the presidency of Vinicio Cerezo would appear to offer little comfort to any but the privileged minority.

Painter confronts the failure of the Christian Democratic Party, elected in January 1986. to offer any possibility of change. In a country rich in fertile land, oil and mineral deposits it must be questioned why “only a very small percentage of the Guatemalan population does not suffer from the ravages of poverty”. The present government may have inherited a dire set of circumstances in which, according to the Government State Planning Council at the end of 1985, as many as 86 per cent of families lived below the official poverty line, yet not even a modest programme of reforms has been suggested. Guatemala has the worst infant mortality rate in Central America with intestinal infections, influenza, pneumonia, measles and whooping cough being major killers; adequate nutrition, vaccination. a proper sewerage and water system would greatly reduce those figures. That may give little comfort in a nation in which 25 per cent of male deaths occurred as a result of political or common violence in the early 1980s. Guatemala’s priorities lie elsewhere with spending on health at a minimum but with ever-increasing spending on defence, security and, more recently, debt repayments. The author sees Guatemala’s problems as a

direct result of an unbridled “free market” economic system that puts wealth into the hands of a powerful and privileged few and increases the poverty of the many.

To understand Guatemala’s poverty it is necessary to examine the economic system which is its creator. This is a country in which, according to the Ministry of the Economy in the early 1980s, 83 per cent of the rural population received 35 per cent of rural income while two per cent received 40 per cent of it. Agricultural wages are desperately low. Labourers are not the consumers of an agriculture whose products arc exported to the rich industrial nations. Food products for the Guatemalan diet have tended to stagnate causing greater reliance on expensive imported food stuffs. According to USAID there are as many as three million acres of idle land, found mostly in the large private estates:

Decisions about what to grow were made on the basis of private gain, and enough food was only granted to those who had sufficient income or land to afford it.

At the same time any attempt to organise trade unions or co-operatives among workers and peasants has been met by violent repression.

The author suggests a programme of reforms to combat Guatemala’s poverty. These include agrarian reform, nationalisation and a more “equitable” reproportioning of the tax burden. Such reforms would merely tamper with a system which exists to perpetuate privilege at the expense of the majority. Reforms are a limited reaction, nevertheless even a suggestion of reform invites the label of “communist subversive” and risks disappearance or death.

Political and economic control of Guatemala lies in the hands of the Guatemalan elite, the security forces and a number of mainly US transnationals and banks. The involvement of the armed forces as an integral component of the economy has escalated since the 1960s. The army has interests in as many as 40 semi-autonomous state enterprises. It controls the ironically named Military Social Welfare Institute which owns its own bank, El Banco de Ejercito. Painter points out that while army involvement in the economy is not unusual in Central America, in Guatemala the officers have “acquired an unparalleled notoriety for . . . corruption, voracity and entrepreneurial zeal”. The military has effective economic and managerial control of AVIATECA. the national airline, TAM, military air transport, the main Aurora international airport, GUATEL, the public telecommunications system INDE, the state-owned electricity company, its own television stations as well as such institutions as BANVI (National Housing Bank). DIGESA (Agricultural Services Agency) and INTECAP (Technical Training Institute).

The Christian Democratic Party advocates a policy of “communitarianism” in which, theoretically. individuals are fulfilled through “personalism and the common good”. In practice the party has operated in the interests of the dominant power groups with little consideration for the needs of the majority: the rights of private property are sacred and not to be tampered with. Cerezo is on record as saying that the party would not pursue reforms as this would be “disastrous for the economy and provoke capital flight” and so the Christian Democratic Party maintains the status quo. The party endorses the rights of the dominant trinity of interests, private business, the military and US transnationals and. equally as important, is accepted and tolerated by those interests. This adds poignancy to Eduardo Galeano’s observation that in Guatemala elections are “a joke on the people who have nothing and decide nothing” Repression still continues and during 1986 the Guatemalan Commission for Human Rights based in Mexico said that there were 126 politically related disappearances and 463 extra-judicial assassinations.

Cerezo’s policies are not untypical of the 1980s. He has sought to reduce inflation by printing less money. He has sought economic growth through offering incentives to the private sector and stimulating foreign capital investment. He has also sought foreign aid to supplement the need for foreign exchange and to regularise the balance of payments crisis. In this he is consistent with IMF thinking. Meanwhile, wages were cut by 16.7 per cent between January and September of Cerezo’s first year in office.
For the majority the future offers little:

the removal of the structural causes that create the gross inequalities, the wrenching poverty and the horrendous human rights violations seems even more remote.

Painter argues for a programme of giving land to the peasants and reforming the tax system but the call for reforms fails to recognise that the structural causes of poverty must themselves be removed if the majority are to have access to the wealth they have created. Painter argues that what minor reforms have been applied “can be nothing more than palliatives” but does not recognise that his large scale reforms are themselves at best palliatives. This may seem a bleak vision but it is a direct consequence of a nation committed to a system in which the profits of the few are pursued regardless of the consequences for the majority.