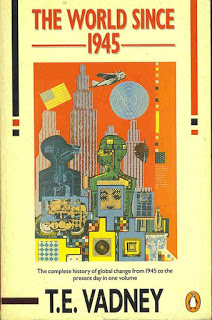 One day we shall be able to look back at books like this and the events they describe and wonder why people put up with capitalism for so long. For this history of wars and coups and massacres shows a society based on conflict and competition, where governments and ruling classes try to outmanoeuvre each other. Satisfying the needs of the earth’s population is not one of capitalism’s priorities.

Vadney focusses on political events, by which he means primarily the various aspects of great power rivalry, so that the lives of ordinary men and women rarely enter the narrative — except, of course, when they form cannon fodder for the rulers. Thus at least a million civilians were killed in South Vietnam between 1965 and 1974. In the period covered in the book, about 25 million people have been killed in war and other conflict in the Third World, to say nothing of the millions who have died in artificially-created famines.

Time and again Vadney shows how economic and strategic motives underlie political actions. The American Marshall Plan of 1947, for instance, was intended to boost the economies of the Western European states, with the ulterior aim of enabling them to afford American imports and to compete with the Russian-bloc countries. In 1954, the US staged a coup against the government of Guatemala, which was nationalising land much of which was owned by American companies. The truly global nature of capitalism is evident too: for example, the Jamaican economy in the 1970s was very much at the mercy of the global recession, in spite of the government’s efforts to control things.

A couple of points which Vadney treats as if they were virtually obvious show how some things which socialists have been saying for years eventually become commonplace. Firstly. China after 1949 practised ‘national capitalism’ (read ‘state capitalism’). Secondly, the countries of Eastern Europe have ruling classes with far greater power and material rewards than ordinary workers.

Rather than the author’s pessimistic closing remarks that vested interests which benefit from the status quo will block any attempt to change and improve things, the appropriate conclusion to draw is that any social system whose history is to be told in these terms must be abolished as soon as possible.