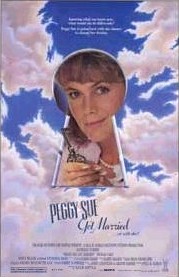 This is yet another film that attempts to cash in on the seemingly bottomless demand for nostalgic recreations of the 50s and 60s. The story line is a very thin excuse for a sentimental look at American teenagers in 1960. albeit with the benefit of hindsight.

Peggy Sue, played by Kathleen Turner, is the mother of two teenagers and is on the verge of divorcing the husband she met while still at high school. She collapses at a high school reunion party and regains consciousness to find herself miraculously transported back to 1960, when she is just eighteen once again but this time armed with the knowledge and experience gained from adult life. Will she or won’t she play her life the same way the second time around?

At first she looks as if she might do things differently this time in order to avoid the painful marital breakdown she knows lies ahead. She takes up with the class rebel who is trying very hard to ape the beat poets by reciting pretentious poetry to her. But the wisdom acquired from experience leads her to turn down his offer of running away to Utah to raise chickens to support his literary endeavours. In the (very gooey) end, love will out. She marries teenage sweetheart Charley again and, as a result of a hilariously unconvincing attempt to resolve the dilemma of how to bring her back from the past, is transported to a hospital bed in the 1980s to find her repentant husband, Nicholas Cage, waiting to tell her that he can’t live without her etc.

The director, Francis Coppola, gives the audience one or two nice moments which highlight the changes in social manners and mores that have taken place since the early ’60s, such as the end-of-date session in the car when Peggy Sue, imbued with the more enlightened ideas of the 70s and ’80s. is trying to persuade boyfriend Charley to make love to her and finally resorts to saying “You would if you loved me!” Charley is outraged: “Peggy Sue, what’s gotten into you. That’s the man’s line!” But apart from a few one-liners and nicely observed details (like layers of stiffened petticoats) this is an unlikely and cloyingly sweet piece of nostalgic nonsense.