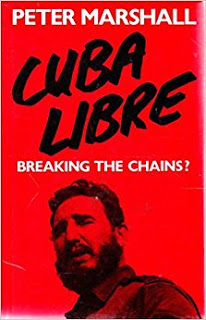 After a historical account of Cuban politics, the bulk of this book discusses various aspects of present-day Cuba, based largely on visits by the author in 1984. For anyone wanting an introduction to these topics, it will prove very useful.

Marshall makes no secret of his sympathy with Castro and Cuban developments. He points out the contrasts with the squalid and oppressive dictatorship of pre-Castro days, the expansion of literacy and education, the comprehensive health care system. At the same time, he discusses, often at length, many features of Cuban society which clearly show it to be no model for emulation.

Trade unions are basically just government tools, and strikes are illegal. A catch-all statute concerning “crimes against state security”, which can result in the death penalty, has been used against workers involved in unofficial unions. There are thousands of political prisoners, even though dissidents are every so often packed off to the United States. Appalling anti-gay prejudice exists. Stress-related diseases are common, and the seventh most important cause of death is . . . suicide. Through identity cards and personal files, the state can exercise close control over every worker and student, each supposed shortcoming being recorded for posterity.

The only difference between Cuba’s economic system now and capitalism is that so-called profits’ theoretically go to benefit the people as a whole rather than individual owners or shareholders, and that every aspect of the economy is developed according to an inflexible five-year plan.

But there has always been a free market, of varying extent, operating in Cuba, and state plans simply do not and cannot plan for everything, as witness the abortive attempts to reduce the dependence on sugar. As for profits benefiting everyone, even Castro has admitted to the creation of “a class of newly rich”, and power and wealth are by no means equally distributed.

Before taking power, Castro had promised free elections within a year, but this was soon reneged on. Marshall is aware that direct democracy and workers’ control are lacking, and describes Cuba’s political system as a “consultative oligarchy”: a small number of leaders monopolise power but consult with others, especially top Communist Party members. This is a pretty feeble form of consultation, however, and ordinary working people have effectively no say in the running of an all-powerful state which brooks no opposition and interferes in all aspects of daily life.

It is clear, then, that Cuba is a capitalist country where workers, far from having broken their chains, are bound by the same chains as workers everywhere.