Formation of The Socialist Party

In a recent circular we drew your attention to the position of the SDF and the particular conditions surrounding some of its prominent members.

For years those who hold the views given in our previous manifesto have been working inside the Movement with a view to bringing the various facts before the members of the rank and file, and up to the issue of that circular we were hoping that even yet it would be possible to remodel the SDF and bring its policy into line with its principles.

Against this, however, was the fact that the Executive Council, largely influenced by H. Quelch, who, as we have shown in our previous circular, is dominated by the Trade Union leaders and others who have a financial grip upon the Twentieth Century Press, opposed in every way free and open discussion of our position. All criticisms of the policy or the actions of the Executive Council were turned into questions of personal abuse in order to hide the real issue.

The EC have now completely cast off the mask in this matter. Not only were the expulsions engineered at the Conference entirely without justification, evidence or notice — unless the endeavour of those expelled to lay the facts before their fellow-members is considered justification —but the EC have since expelled four other comrades for merely protesting against this action, and in their latest circular they again purposely obscure the issue, decline to discuss, and express their intention of expelling, without right of appeal, those members who dare to advocate the adoption of an uncompromising policy.

The support by H. Quelch and C. F. Davis, of five Liberal-Labour candidates for the London County Council, viz.. Ben Cooper, W. Steadman, H. Gosling, G. Drew and J. Gregory. when these men were nominated at a meeting of the London Trades Council, (of which since then H. Quelch has been appointed Chairman) the support of capitalist candidates for Parliament, e.g.. D. Naoroji (a large shareholder in the Twentieth Century Press), by J. F. Green, sanctioned by the Executive Council; Percy Alden by Will Thorne (a Parliamentary candidate of the SDF) in spite of the determined opposition of the Tottenham Branch of the SDF, the support of Will Crooks by the same SDF representative, the canvass by J. Hunter Watts of various members of the SDF on behalf of Masterman, Liberal candidate for Dulwich; the repeated declaration by Quelch that he should ask to sanction the EC to support W. Steadman, the Liberal candidate for Central Finsbury; the support of the late EC. of Tillett and Burgess; and by the present EC by J. Hill, Liberal-Labour candidate at Govan; the support by H. Quelch of J. J. Terrett, a thrice expelled member of the Federation, at North West Ham. against the known desires of the two local branches; — these are a few recent instances of the breaches of discipline encouraged and condoned by the official SDF. It is these men who now have the audacity and sought to enforce Socialist discipline upon the leaders and officials and officials of the body.

Now, Comrades, in building up a strong Socialist Party it is indispensible that the fullest discussion on all matters affecting the position of the Organisation should be allowed, and it is also obvious that the members of a Militant Revolutionary Party cannot consent in any way to have their opinions stifled by the actions of their EC. But it is now evident that all further education of the members, either in relation to the facts of the situation, or in the essential principles upon which the Federation is based, is impossible within that body.

Realising this, the signatories to the aforementioned circular met together with 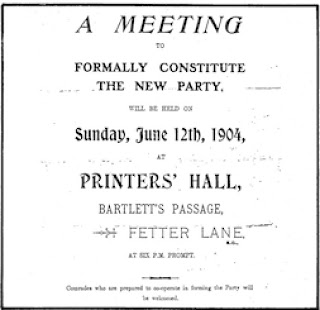 others at Sidney Hall. Battersea, on Sunday, May 15, 1904,  to consider the whole position. and carried with enthusiasm the following resolution:

That this meeting has arrived at the conclusion that the only way to put the principles and policy embedded in the circular into operation is to leave the SDF in a body and send a manifesto round the branches explaining our position and calling upon all those who are in favour of the same to join us in forming a straight, uncompromising Socialist Party.

In pursuance of this resolution, we appeal to all comrades who believe that the economic forces working through the development of capitalist society demand the formation of a Revolutionary Socialist Party; who believe that the emancipation of the working-class can only be obtained by the combined action of the members of that class, consciously organised in a Socialist Party, and who recognise that the Class-Struggle can alone be the basis of such a party; that therefore Social Democrats must avow themselves in opposition to all non- Socialist parties and politicians; and who realise that the SDF has ceased to merit the name of such a party, to throw in your lot with us and help us in building up a strong and healthy fighting party, organised on definite class lines for the emancipation of the working class from wage-slavery under which they exist — from the capitalist society of which they are the victims.

Comrades, in London we have with us most of the active workers in the SDF — so much so that that organisation can no longer provide a lecture list, owing to the lack of speakers — and from the provinces we have a number of promises of support.

Conscious of the rectitude of our principles and the soundness of our policy, we ask you to help us to carry them into action, to cease to belong to a body which is fast becoming compromised beyond redemption. and to refuse longer to place men or traditions above the soundness of your principles or your party.

Signed on behalf of the Battersea Meeting