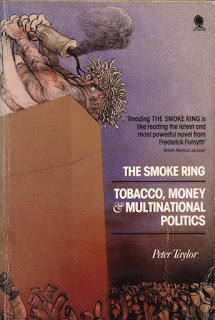 The Smoke Ring – the politics of tobacco. Peter Taylor (The Bodley Head. £9.95)
Peter Taylor’s book reveals that it is not only the smokers’ vision that is affected by smoking tobacco, but their health in general. He supports this serious charge with an impressive array of quotations from many eminent medical authorities, such as The World Health Organisation. Britain’s Royal College of Surgeons and the US Surgeon General. The latter is quoted as saying: “The evidence that smoking greatly increases the incidence of lung cancer is now irrefutable” (The Health Consequences of Smoking. Cancer – Report of the Surgeon General 1980. p.7. US Department of Health). The section dealing with health is a vital part of this book, but that is not all.
Of equal importance. Taylor reveals in great detail the relationship between governments and the tobacco industry and the political conflict between wealth and health, which is as old as tobacco itself. Throughout history governments have condemned tobacco while rubbing their hands at the money it brings in to their treasuries. King James of England, in 1603. described smoking in A Counter-Blaste to Tobacco as “a custom loathsome to the eye. hateful to the nose, harmful to the brain, dangerous to the lungs”. He increased the tax on tobacco by 4.000 per cent from 2d (1p) a pound to 6s.8d (34p). Finding that the much needed revenue from tobacco was not coming in, for the simple reason that people could not afford to smoke, he then slashed the tax to 2s.0d (10p) a pound and money poured into the Royal coffers. Governments have followed a similar policy ever since. The 1981 Budget showed tobacco as the government’s third biggest source of consumer revenue: £11bn came from VAT. £3.6bn from hydrocarbon oil and £2.8bn from tobacco.
The Royal College of Physicians are aware of the conflict between wealth and health. In their 1971 Report Smoking and Health Now they say:

It appears that the Government’s failure to take any effective preventative action is based on the fear that the country can neither afford nor lose revenue derived from tobacco taxation, nor tolerate the economic consequences of running down the tobacco industry Unofficial assessment, however, suggests that this fear might be mistaken.

However the author goes on to say that in purely economic terms, the political benefits of cigarettes far outweigh their social cost (in Britain, for example, revenue from cigarettes brings the Treasury over £4bn a year). Cigarette related diseases cost the NHS a tiny fraction of that; in direct costs £165m a year. Wealth beats health every time.
The tobacco industry inevitably draws the trade unionists employed within it into the political battle. Tobacco workers have a long tradition of militancy, going back to the 19th century when cigar workers fought for equal pay for women employed in the industry The Tobacco Workers Union has always supported “progressive causes” It was one of the founders of CND and the Anti-Apartheid Movement.
Charles Greive, their general secretary, did not recognise any contradiction between fighting for these “progressive causes” and fighting to preserve the tobacco industry. He said the union had a duty to represent the interests of its members — which, while correct, also shows the limitations and problems of trade union action under capitalism.
Despite the views of the Tobacco Workers’ Union, the TUC has taken a strong anti-smoking line. In 1981. as a result of a resolution passed at its Annual Conference, its Social Insurance and Industrial Welfare Committee drew up a confidential document entitled Smoking and Health. This Committee reported that more working days were lost through smoking than through industrial action. The issue was of concern to trade unionists because 56 per cent of smokers were unskilled manual workers and they recommended a smoking control programme. In the meantime, the Tobacco Workers’ Union got hold of a copy of the TUC Committee’s document and were angry that they had not been consulted. They dismissed the document as “little more than a rehash of propaganda”. They believed it was an attack on the tobacco industry which endangered their members’ jobs. However in September 1982 the Committee’s document became official TUC policy. It was a notable victory for the Health lobby and their supporters within the movement. The jobs at risk were only a handful of the TUC’s 12 million members, there was no revenue involved and the tobacco industry has few friends within the TUC. So for once, at least, health had had a clear run — until it ran into Labour Party politics:

The Health campaigners had every reason to believe that the Labour Party would include a clear statement of its intent to ban cigarette advertising in the Health Policy document it drew up for the 1983 election. They were disappointed. There was no reference to legislation, only a promise to act” although Labour’s Shadow Health Secretary Gwynneth “Gunboat” Dunwoody was personally committed to banning all cigarette advertising “If I’m Minister there will be direct action” she assured me . . .

It was perhaps fortunate for Dunwoody that Labour lost the general election in 1983, which meant that she never had the opportunity to translate her words into deeds for, as Taylor relates, on a recent occasion a British Health Minister committed to taking political action against the tobacco industry was moved away from his department. This book is a comprehensive study of the tactics and strategy of six multi-national tobacco giants, showing their considerable economic power and enormous political influence. It exposes (he extensive wheeling and dealing in the “market” — a place where human life itself is second only to profit.
Wally Preston