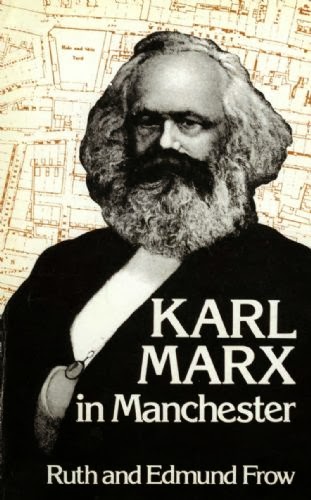 Today, no public library is complete without a number of books dealing with Marxism on its shelves. What is true of municipal libraries equally applies to the retail book trade and extends to university libraries.

It was against this background, and the centenary of Marx’s death, that the Manchester Public Library Committee decided to organise an educational exhibition on the close relationship of Marx and Engels to the city of Manchester. Held at its Central Library, (which incidentally stands on the site of Peterloo) the exhibition was so sell attended that it was given an extended run. Arising directly from the event, the Working Class Movement Library decided to print R. & E. Frow’s Marx in Manchester.

The booklet is more than a detailed account of Marx’s many visits to Manchester. It deals fully with the important reasons for them, among which was the necessary and essential research for Capital and his need to pool knowledge and share experience with his many close friends and comrades in the town. These included his friend and collaborator Engels, who lived in Manchester for 20 years, Wilhelm Wolff (‘Lupus”), the Manchester teacher to whom Volume One of Capital was dedicated, and Samuel Moore, who translated Capital. Given Marx’s constant ill-health, his visits also provided an opportunity for medical treatment by Dr. Edward Gurnbert (the Physician in General) who was Marx and Engels’ doctor and a close friend. Often Marx and his wife Jenny would stay ay the Gurnbert house.

On Engels’ arrival in Manchester in December 1842—just after the conclusion of the Lancashire General Strike (referred to by the bourgeois historians as the “Plug Riots.”)—the town had already undergone a huge industrial transformation. It had become the centre of a new factory system in which the mode of production had been completely changed by the use of steam and machinery. Its cotton products were famous throughout the world. Here was the first great factory town the world had ever known; the birthplace of large-scale capitalist production and the modern proletariat. The workers there had experience of the class struggle (the town was an important centre for the Chartist movement) and Robert Owen’s teachings were well known (he had been employed in a Manchester mill). 16 August 1819 (Peterloo) was still well remembered by the workers.

The main source of information in Manchester for Marx was Chethams Library. He told his publishers later that the journey had been taken exclusively for research for this book on political economy. Engels wrote: “at that time Marx had never yet been in the reading room of the British Museum. Beside the libraries of Paris and Brussels, besides my books and extracts seen during a six weeks’ journey in England we made in the summer of 1845, he only examined such books as were procurable in Manchester.” Some of the material collected was put to good use by Marx in his Poverty of Philosophy. Also a large amount of the historical material contained in Capital was obtained from Chethams Library.

Marx was elected as an honorary delegate to the Chartist Labour Parliament held in Manchester in 1854. This conference was attended by delegates from all over the country, and Marx’s message to them was a clear and concise summary of what was happening in the political arena. He urged that the proceedings should be aimed at organising the working class for the conquest of political power and the immediate taking over of the means of production.

In 1864, the First International was founded. It constituted one of the most memorable episodes in the history of socialism. The International had branches in Manchester and Salford, both of which has the support of the local Trade Council. Marx’s key role in the IWMA meant that yet again he had direct links with the Manchester working-class movement. Incidentally, Engels regularly posted the Manchester Guardian to Marx, who closely followed the movements of the Cotton market, as a reading of Capital will show.

The authors list the monies paid annually to Marx by Engels, during the latter’s stay in Manchester. They also provide an exact and detailed account of Engels’ income from the firm of Erman & Engels, in which his father was a junior partner, thus clearing away the considerable confusion on this issue.

This low-priced booklet is published by an organisation of workers, the profit motive plays no role in their decision to write and publish material on working class history. As a source of information on an aspect of Marx’s life not usually dealt with, it deserves a place on every bookshelf.