The Labour government which entered office in 1945 was not the first in this country but it differed importantly from its two predecessors in that it was the first to have a clear majority of MPs in Parliament. The first Labour government in 1924, which lasted for less than a year, was very much a minority government. Its MPs numbered 191. against 258 Tories and 159 Liberals. It could exist only with Liberal support. The second Labour government of 1929-1931 was the largest of the three parties in Parliament but was still dependent on Liberal support, because the 288 Labour MPs were outnumbered by the combined strength of 260 Tories and 59 Liberals.

At the 1945 General Election, the Labour Party committed itself to a big programme of legislation, including widespread nationalisation, the National Insurance Act. and the National Health Service and pledged itself to maintain “full employment” and “good wages” and a more or less stable price level. In foreign policy the Labour Party promised support for the United Nations and disarmament and undertook to work to remove the threat of war. The election programme had particular reference to America and Russia:

We must consolidate in peace the great wartime association of the British Commonwealth with the USA and the USSR. Let it not be forgotten that in the years leading up to the war the Tories were so scared of Russia that they missed the chance to establish a partnership which might well have prevented the war.

The programme also had something to say about what it called socialism.

The Labour Party is a Socialist Party and proud of it. Its ultimate purpose at home is the establishment of the Socialist Commonwealth of Great Britain — free, democratic, progressive, public-spirited, its material resources organised in the service of the British people

How did its performance stand up to its promises? First the promise of socialism. If this had been true it would have put the Labour Party in total and permanent opposition to the Tory and Liberal parties. So little was it ever true that the Labour Party had served, along with the Tories and Liberals, in the coalition governments of two World Wars. The real intention of all Labour governments has not been to abolish capitalism, but to demonstrate that it can administer the system more successfully than the other capitalist parties. In 1929 the Minister in charge of employment. J.H. Thomas, had admitted that he was seeking to reduce unemployment “while accepting the present order of society” (unemployment jumped by a million). Some forty years later it was the Chairman of the Parliamentary Labour Party, speaking of the Labour government 1964-70. who said: “Never has any previous government done so much in so short a time to make modern capitalism work”. (The Times, 5 April 1967.)

Specifically, what the Labour Party means by socialism is nationalisation — that is, state capitalism. They like to claim that this aim separates them from the Tories and Liberals but the facts belie the claim. Long before a Labour government came into being there had been a long history of nationalisation by Tories and Liberals, including the postal, telegraph and telephone services and the 1844 Act giving the then Tory government power to nationalise the railways. After World War 1 Churchill and Lloyd George had campaigned for railway nationalisation, and in 1943 in a broadcast. Churchill had said: “there is a broadening field for state ownership and enterprise especially in relation to Monopolies ‘.

In the 19th century Tory and Liberal policy on over-powerful monopolies was to nationalise them. Now that policy has been abandoned in favour of the present Tory policy of using laws against monopolies, on the lines of policy in America. In the field of disarmament and war the 1945 Labour government’s hopes and intentions came to nothing. Along with America the Labour government got involved in the “cold war” and the Korean war. In 1950, fearful of a supposed threat from Russia to over-run Western Europe, the Labour government launched its great re-armament programme, and “defence” expenditure jumped from £770 million in 1948 to £1,110 million.

The Labour Party claims to deserve the “credit” for the National Insurance scheme and the National Health Service, but these were both commitments of the war-time coalition government. It was that government which, in 1941, appointed Lord Beveridge to examine and report on the introduction of these schemes and it was the same government which, in 1944, published the first proposals for a comprehensive National Health Service. The Labour government had intended the scheme to provide “free” treatment, but in 1951 it introduced charges for dentures and spectacles, a policy carried further by later governments.

A boast made at the time, and still being made is that it was due to Labour government policy that unemployment in the years 1945-1951 was very low. It was indeed — it averaged under 2 per cent for the whole six years, compared with 13 per cent in 1985. But in the following six years 1951-1956 under Tory Government it was even lower, an average of just over 1½  per cent. But in neither case was it due to government policy. One factor in the low level of unemployment was the backlog of work left after the war, in such fields as housing and factory building. Provided that British industry could get raw materials and fuel supplies, there was a big market for British exports. Getting the raw materials and fuel was greatly helped by the hundreds of millions of pounds received from the American government under Marshall Aid. A minister in the Labour government, Aneurin Bevan, stated in 1948 that “without Marshall Aid unemployment in this country would at once rise by 1,500,000”. That is to say it would have been at depression level, as indeed it was at that time in several countries including Italy, Germany and Belgium. Another factor in the low unemployment was that British exports of manufactured goods had a particular and temporary advantage because some other countries — notably Japan and Germany — had effectively been knocked out of the world market by the war-time destruction of their industry.

The British share of total world export of manufactures, which in 1900 had been 33 per cent and had steadily fallen, to 21 per cent in 1938, received this special boost and jumped in 1948 to 29 per cent, which helped in keeping unemployment low. As Japan and Germany came back into the world market with their fierce competitive manufactures the British percentage of the total export of manufactures has steadily declined again and British unemployment has been on a continuous upward trend. 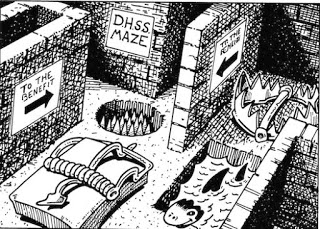 The policy of “full employment” was one to which all three coalition parties, Tories, Labour and Liberals, had been committed by the 1944 White Paper Employment Policy. This pledged all post-war governments, whatever their political complexion, to maintain “full employment” by the use of Keynesian techniques of so-called demand management. This theory is based on economic fallacies and has never worked. Faced with rising unemployment, the Labour government under James Callaghan (with Denis Healey as Chancellor) declared its abandonment of Keynesian policy in 1977 and the adoption of its idiot-twin called monetarism, which has been continued by the Thatcher government.

The 1945 Labour government was committed to maintain a more or less stable price level. In practice prices went up by 33 percent between 1945 and 1951. Under the Tories, equally committed to stable prices, they went up by another 25 per cent in the next six years 1951-1956 and have continued to rise under every subsequent government, including the present one. In practice the pledge of the 1945 Labour government to aim at “good wages” took the form of trying to hold wages down in the first of many “income policies”, introduced by the Attlee government in 1947. Another action of the 1945 Labour government not provided for in their Election Programme was the devaluation of the pound in 1949, from four dollars to 2.80 dollars, although for a long time the government declared that it had no such intention.

Looking back on the 1945 Labour government, what in fact did it achieve? It carried through a lot of nationalisation measures. But what about the accompanying promise that nationalisation would improve the workers’ conditions and reduce the number of strikes? Most strikes nowadays are in the nationalised industries and nationalisation has done nothing for the working class. The so-called Welfare State, which was supposed to abolish poverty, has totally failed to do so.