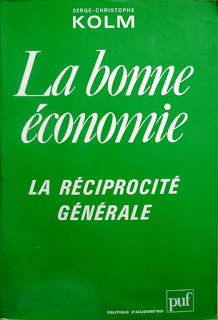 One of the signs that socialism is the solution to problems facing society today, and will finally come to be recognised as such by a majority of people through their experiences of capitalism, is that genuine socialist ideas are beginning to be discussed seriously at all levels of society. A case in point is a book recently published in France by the academic economist Serge-Christophe Kolm entitled La bonne économie: la réciprocité générale.

Kolm sets out to examine what would be the ideal economic system – “la bonne économie” (the good economy), as he puts it — the best way of organising the production and transfer of goods and services to satisfy human needs. He begins by pointing out that it is usually assumed that there are only two possible economic systems: one based on the free exchange of goods and services and one based on their forced transfer. He calls these the Market and the Plan (but we call them private capitalism and state capitalism). He remarks that this is to ignore a third possible way of transferring goods and services — freely giving and receiving. As this economy, given modem technology, could not be based on individuals giving gifts directly to each other, but on individual members of society voluntarily giving their labour to society as a whole (to all other individuals collectively) and on them receiving freely from society the goods and services to satisfy their needs. Kolm calls it “General Reciprocity”.

Such an “economy” (to use Kolm’s terminology). in which people would voluntarily work to produce goods and services which they would then freely take according to their own self-defined needs, is clearly more or less what we mean by “socialism” or “communism”. Kolm himself distinguishes his “general reciprocity” from communism as envisaged by Marx and others on the grounds that the wording of the slogan “from each according to their capacity. to each according to their needs” does not make it clear whether this is to be implemented by giving (voluntarily) or by imperative planning (through the state). He prefers as a slogan “from each, voluntarily, according to the needs of others”. He does, however, recognise a close similarity between his “good economy” and the anarchist-communism of Kropotkin; in fact he describes “general reciprocity” as the voluntary “putting on the pile” which must precede the free “taking from the pile” advocated by Kropotkin. (We argue that Marx’s conception of communism was also a stateless communism and that Kolm has misunderstood Marx here.)

Having established what “the good economy” would be. Kolm then proceeds to examine whether such an economy based on giving and receiving (rather than on buying and selling or on state planning) would be practicable. For him, any economic system, as a system of production and transfer of goods and services, has to be able to solve two key problems: motivation (essentially people’s incentive to work) and information (about the goods and services people need and on the best way of producing them). It is here that Kolm’s argument weakens and since most of his 500-page book is devoted to seeking solutions to these two problems, this considerably undermines its value.

On motivation, Kolm has no difficulty in refuting the prejudice that a society in which work was voluntary and goods were free would not work because people are by nature greedy, lazy, selfish and aggressive. The anthropological and sociological evidence, some of which Kolm sets out, shows that there is nothing in the biological or psychological make-up of humans to prevent them co-operating for the common good. Unfortunately Kolm chooses to express this as “altruism”. People, he says, can – and should – behave as altruists rather than as egoists, thus giving the impression that establishing a new society is a question of adopting a different moral code of behaviour. But this is not the case: to establish socialism people do not have to stop being selfish and become saints; they merely have to remove, by conscious political action, the barrier which coercive, class society represents to the free exercise of their nature as co-operative, social animals. In any event, and staying on the philosophical level at which Kolm conducts his argument here, socialism does not require that people should put the interest of others before their own (altruism) but merely that they should recognise that it is in their own best interest to co-operate with others to further the common interest.

On information, Kolm’s solution is even weaker: he suggests retaining money as a unit of account and the use of fictitious prices, profits, rates of interest, marginal costs and so on. Thus we are asked to imagine a situation in which the goods freely available for taking from the common store would nevertheless have price-tags to enable people to compare their marginal propensity to consume with their marginal productivity or whatever! But why? Why would a general unit of account measuring economic “value” be necessary in a society based on voluntary work and “taking from the pile”? The main “information” that would be needed would be about what people wanted, but this presents no problem whatsoever; it can be gauged from what people actually choose to take freely from the store over a preceding period or simply by asking people. The question of what productive methods to use to supply the goods and services to satisfy these needs is more complicated, but can be solved without the need for a general unit of account. Calculations would still be necessary but could be done exclusively in kind, that is, they would be technical rather than economic calculations, carried out in physical quantities and taking into account social decisions regarding things like working conditions and pollution.

So, although Kolm has more or less correctly identified what “the good economy” would be, he has not fully understood all its implications. Perhaps this is because, as the last, mathematical part of his book betrays, he is more interested in studying “an economy of altruists” (in contrast to Adam Smith’s “economy of egoists”) as an interesting theoretical proposition than in establishing a free co-operative society as a solution to current social problems. For all its shortcomings, however, Kolm’s book is a serious discussion of the possibility of a society based on giving/receiving rather than buying/selling, and as such will contribute to the spread of the idea of socialism.