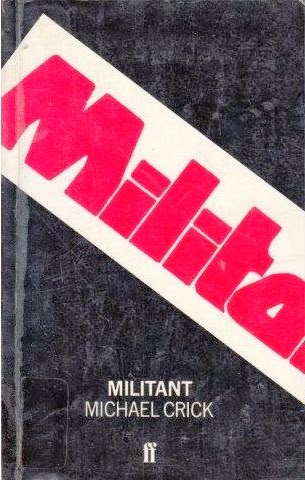 Militant, Michael Crick (Faber & Faber, 1984)
Much of this book deals with the history of the Militant Tendency from its stumbling beginnings in the various Trotskyist organisations (whose remains have littered the fringes of the Labour movement for fifty years) to its present, influential role in Labour’s left wing.
Entrism is discussed as a specifically Trotskyist tactic, but one interpreted in as many different ways as there are Trotskyist organisations. Militant have developed a peculiar brand called Deep Entrism, a modified version of the “waiting for Lefty” entrism whereby they join a party at a time of social and political upheaval in order to be at the forefront of the revolution when the right moment comes.
Michael Crick notes (page 25) that “it is particularly ironic that three of the main leaders of the recent campaign against Militant should have all incurred the wrath of party officials at one time or another: Denis Healey—the Communist infiltrator of the 1930s; Jim Mortimer—member of a proscribed organisation; and, above all, Michael Foot”. He also finds it interesting that “rebels should so easily become leaders” (page 25), but it comes as no surprise to socialists or anyone else who sees the futility of workers placing their trust in leaders of any kind. The argument against leadership is eloquently (if unintentionally) stated throughout the book.
The chapters relating to the organisational manoeuvrings of the leadership, Militant and other groupings in the Labour Party will be regarded by some as a central and important feature of the book. In fact, it borders on the irrelevant. The book however is worth reading as an outline of the history and nature of Trotskyist organisations. The cult of leadership is demonstrated by looking at the various Trotskyist organisations, which seem to have been dominated by only three or four individuals over the past half century.
Allied to this question of leadership, the book examines the organisational form taken by all such parties, the form of democratic centralism. Nominally the leadership is elected by the members, but an outgoing leadership will propose to a conference the new leadership and central committee by means of a “slate” (or list) of candidates. Members do not vote for individuals but for such a slate and it is rare indeed for an alternative slate to be proposed. This explains the “remarkable continuity of the Militant leadership over the years” (page 105). It should also be noted that this process of a self-perpetuating leadership explains the enormous power and prestige such a leadership has relative to its own organisation.
The organisation of such groups as Militant and all other followers of Bolshevism is certainly centralised, but has little to do with any democratic process.
Crick’s book is largely a patchwork of interviews with old acquaintances and colleagues of the Militant leadership, the author’s own observations and prejudices and already well-known facts about Militant but there is virtually no new material on the organisation. Much of the information on Ted Grant appears to be intended to reduce argument to personalised ridicule, unfairly depicting Grant as a senile eccentric. It is indicative of the state of the Labour Party that while sections can hold enquiries  into entrist groups or whatever, and spend “. . . in the year leading up to June 1983 four of the Executive’s monthly meetings . . .  devoted almost entirely to the issue” (page 200), they cannot find time to seriously examine the nature of capitalism or to reach any conclusion regarding the urgency of socialist revolution.
Militant may sloganise and print radical catchphrases on its front page headlines but is in fact just another reformist organisation which is well suited to the Labour Party. Whether Militant and the Labour Party retain their companionship or not is a matter of complete indifference to workers. The tragedy is that in the eyes of many workers, revolutionary socialism is confused with Trotskyism, Leninism and  Bolshevism. It is an urgent task to remedy this situation and expose the quack remedies not only of Militant, but all those on the political left who distort the meaning of socialism.
Steve England
Further Reading:
Socialist Standard September 2006 – ‘Death of a tendency’
Socialist Standard April 1982 – ‘Which Way to Socialism: Militant Tendency or SPGB?’