Book Review: On the scrap heap 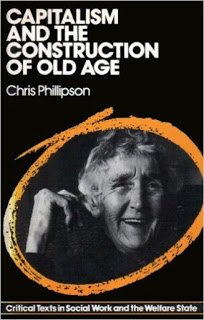 Capitalism and the Construction of Old Age: Chris Phillipson (Macmillan Press Ltd. 1982 p/b £4.95 188pp).
The aim of this book is stated quite clearly in the introduction:

In placing the emphasis on the elderly and capitalist social relations this study is less concerned with age as a biological and psychological problem. We are rather more interested in old age as a problem for a society characterised by major inequalities in the distribution of power, income and property.

The book is well laid out, well referenced, has clear concise headings and manages, on the whole, to provide a good critique of the problems faced by the elderly in a society where one’s usefulness is seen in terms of production.
The author shows quite clearly how elderly workers are manipulated according to the fluctuating demands for labour power under capitalism. Thus, after the second world war, during a labour shortage appeals were made to the elderly to continue working and that withdrawal from work caused premature old age. Twenty years later, at a time of high unemployment, the elderly were encouraged to retire early.
The chapter dealing with women in retirement and old age is particularly useful and shows how the older woman provides often part-time and unskilled labour to fit in with the requirements of the workforce during a time of labour shortage, only to become unemployed and expected to stay at home and care for the sick and the old when public services are cut. The author states:

Because women are viewed as marginal to the labour force, very few attempts have been made to look at the problems they may experience in leaving paid work (p. 68).

and in the following chapter:

The fact that women outnumber men in old people’s homes may in itself to some extent explain the low standards of care and privacy: degradation on the “inside”, reflecting external beliefs about the rights of women in general, and elderly women in particular (p. 73).

The author points out that under capitalism provision for the elderly has no positive investment function and produces negative returns on investment by keeping persons alive and consuming resources even longer than they would have done without that care.
There are several references throughout the book to the differences between the experience of “working class” and “middle class” retirees. Although higher paid workers may not suffer the extremes of poverty in retirement experienced by low paid workers the author, nevertheless. misses the point that every worker who has to sell his or her labour power is a member of the working class. The “middle-class” label is an attempt to split slightly better paid workers from poorly paid workers and blunt class-consciousness by appealing to snobbery, self interest and privilege.
The author highlights the failure of the health service and social services to cater for the elderly person’s needs and the prejudice and hostility shown towards the elderly and to staff working in the geriatric services:

The historical division between the acute and chronic sick has made medicine both unprepared and unwilling to respond to the needs of an ageing population . . . the elderly also suffer from the bias in medicine “away from environmental factors and in favour of the illness model” (p. 119).

There is an interesting chapter dealing with political struggle and organisation which describes the Tooting Action for Pensioners campaign, in a borough where one in five of the inhabitants is elderly. Despite their campaigns St. Benedict’s Hospital, Tooting has been closed: spending cuts in health and social services nationally have been imposed: there has been increasing pressure on elderly workers to retire early; the value of the pension has been reduced by severing its link with wages. Clearly, reform within the capitalist system has not proved very effective.
There is a brief look at the experience of the elderly in Russia and China, which are wrongly described as socialist societies. However, the author describes how inducements were paid to the elderly to remain at work in parts of Russia where the labour shortage was acute in the 1960s, and that the amounts paid varied according to the area (pp. 163/164). A socialist social policy is seen as one which “will make growing old a natural part of the life-cycle, rather than one which is experienced as wholly unnatural and to be feared” (p. 16).
Despite its faults this book is of value as a lucid exposition of the plight of the elderly in a capitalist society, and is increasingly relevant with larger numbers of workers surviving to old age. Comparatively little has been written about the elderly under capitalism and Capitalism and the Construction of Old Age covers the subject well.
Carl Pinel