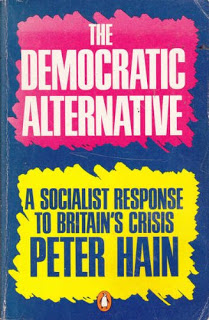 Like a good comrade I agreed to review one of several books offered to me by the Socialist Standard. Like a loser I picked this one and had to plough through 180 pages of muddle-headed nonsense. Peter Hain’s intention in writing this book is to outline how he thinks the Labour Party can win back the support it has lost and get back into power. This is to be achieved by what he calls “socialist policies”, which inevitably turn out to be just another collection of reforms of capitalism.

For example, he wants to see the pound devalued, exchange controls re-imposed, price controls, a statutory minimum wage, the drug companies nationalised, a windfall tax on bank profits and, for good measure, Bobbies back on the beat. Of course, even if all of these reforms were enacted we would still be living in capitalism: the workers would remain an exploited class.

Hain still believes, despite all the evidence, that capitalism can be managed and controlled by a future Labour government. All that would be needed is the will to do it. He wants the next Labour government to work with the unions in developing yet another “National Plan” which would regulate production, trade and investment. But no government can plan these things with any hope of success because it cannot know what future market conditions will be like or what action other governments may take. In other words it cannot act independently of what is happening in the rest of the world.

Hain’s answer to the current slump is the old one of spending-your-way-out-of-it, the spending to be financed by increased government borrowing and heavily taxing the rich. This, he claims, will rejuvenate the economy and bring unemployment down; but it is not as easy as he thinks. Increased government borrowing causes interest rates to rise to levels where many employers cannot afford to borrow just to survive let alone expand. Indeed, in the last few years this “lack of liquidity” has caused many companies to go down the drain and with them a their workers’ jobs. And the more taxation is a raised then the less profits the capitalists will have for re-investment or dividends. If profits fall to the point where investors are unwilling to invest then this, too, will act against reducing unemployment. Incidentally, another of Hain’s ideas for raising capital to finance extra government spending is to lay hands on trade union pension funds!

Other sure-fire vote losers proposed by Hain include giving the rank and file of the armed forces a say in the selection of military leaders, turning the diplomatic service into an instrument of “international socialism”, and Britain to sell armaments only to those who “. . . are advancing the cause of human justice”. Needless to say he is thinking of the likes of Mugabe of Zimbabwe, whose forces are responsible for the murder of thousands of that country’s citizens.

Over and over again Hain reveals his ignorance of even the simplest aspects of capitalism’s operations. He thinks that wages are paid out of profits when, of course, profits are what is left to the enterprise after all costs, including wages, have been met. He also thinks that trade unions protect their members against exploitation. If that were the case then those workers would be producing no surplus value at all. What trade unions do, to one degree or another, is to minimise the level of exploitation. As any genuine socialist knows, exploitation of wage-labour by capital is a feature of capitalism and will only be ended by socialism.

Although this book is studded with references to socialist-this and socialist-that, nowhere does the author reveal any knowledge of what a socialist society entails — a worldwide system of common ownership of the means of wealth production and distribution. A system that will exclude exchange relations and all the things that go with them such as money, prices, wages, profits, banks and pensions. On page 116 Hain writes: “What do we mean by . . . socialist?”, but he never tells us. Maybe this is what he meant when he warned us in the Preface that he wouldn’t be “dotting the i’s and crossing the t’s”.