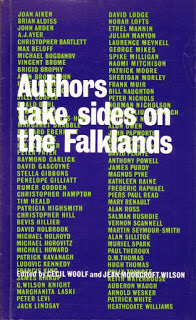 Over the past few months the frenzied jingoism of the Falklands War has been dropped from the national press in favour of more traditional entertainments such as the Royal Baby, the World Cup, the latest slaughter in the Middle East and the “Battle at Home” against the health workers, who not only insist on working hard to care for people, but also bother  the government by wanting to be paid for it.

The Falklands War exposed both Labour and Tory as hypocrites, with Thatcher claiming that about a thousand people died for the sake of the “British” citizens of the Falklands, many of who are prevented from even coming to Britain by the Nationality Act, and the “inveterate peacemonger” Foot fighting to be first to send the gun-boats out. But quite aside from these aspects of the conflict, there is an underlying question which must be answered.

The murderous destruction of the Falklands War, like that of all wars today, arose out of the particular form of society in which the world is divided into nations, competing for profit in the world market. In each of the these countries there is a small class who own and control the factories, mines, offices, hospitals and other means of production, and there is a majority class who have to work in those places to survive. The owning class possesses without having to produce, while wage and salary earners produce accumulations of wealth which they do not possess.

Wars are fought by workers, but over the interests of employers. National sovereignty, lucrative markets, mineral resources and trade routes are matters of concern for those who profit from them. Despite the rhetoric about fighting fascism, defying aggression and loving freedom from governments who scorn democracy, thrive on violence and fear the freedom of their electors, wars are not fought over such ideals. The question is, are workers to defend our own interests by uniting across national boundaries to end war and the system which causes it, or are we to continue to be blinded by the ideology of nationalism?

In Authors take sides on the Falklands a number of writers have been asked whether they supported the government’s action in sending the task force, and how the conflict should have been solved. A number of them. including Magnus Pyke, James Cameron, Peter Cadogan and Christopher Hill, put their faith in the United Nations to deal with these awkward little arguments over control of territory which naturally flows from a system of society based on property and profit. This hope is well answered, though, by John Papworth, who says that “the UN is an international league of warmongers and it is as unreasoning to expect it to secure the abolition of war as it is to expect an international league of the Mafia to secure the abolition of crime”. This elite band of learned academics, imaginative visionaries and humanitarian philosophers come out with the same murderous rubbish which the Sun put more bluntly in its articles about killing “Argies”. Piers Paul Read talks about the “Latin temperament”, and Margaret Drabble, while recognising that the war was a modern form of “bread and circuses”, says that she is patriotic enough to have been “embarrassed” by what happened.

Brian Aldiss, Kingsley Amis, D. M. Thomas, Arthur Hailey, Muriel Spark and Melvyn Bragg all support the idea of workers in British uniforms killing workers killing workers in Argentine uniforms because an Argentine ruler took over some land which was largely controlled by Coalite through the Falklands Islands Company. They see the senseless slaughter as unfortunate, but necessary, because to them the present way of running society is the only way possible and must last forever, even though it has existed for only a fraction of past human life on earth.

Roald Dahl, in between writing pleasant stories to entertain and amuse innocent young children, had this to say:

Today, excessive socialism seems to have nurtured a flabby and idle breed of people who would rather compromise than fight. I would fight. Thank goodness there are some left who would do the same.

H. J. Eysenck, who is supposed to be an expert on intelligence, wrote:

I think the British government’s response to the Argentine annexation of the Falklands Islands was entirely justified, and executed with exemplary determination, courage and competence.

Literary critic G. R. Wilson Knight obediently confessed that since these exemplary cases of burning alive young conscripts to the Argentine forces were ratified by all three parties in Parliament, he would not “presume to register any complaint”. Keith Waterhouse “supported our response — but not its supporters”. The historian Hugh Thomas says that “In the end, the British action was exemplary and I supported it with all my heart”. The astronomer Patrick Moore wrote: “Of course the Government acted correctly”. Spike Milligan, for all his war jokes, seems to think that the only ridiculous thing about war is the idea of trying to get rid of it:

I am for the Government’s response to the Argentine annexation of the Falkland Islands . . . Utopia only exists in the mind . . . the only way to end wars is to have them (p.79)

and Alan Sillitoe hopes that by the time his reply to the questionnaire gets printed the Falklands Islands will be “back where they belong—under British administration”.

There are a few contributors who are more realistic. Peter Fryer points out that “compared with the real problems facing humanity, which set of robbers control a tiny bit of land in the South Atlantic is a pseudo-problem”. Michael Bogdanov asks:

A choice between an exocet and a hospital, a sea-king and a school. What sane person would not opt for welfare before war?

Michael Horovitz quotes Ghandi, when asked what he thought of western civilisation: “I think it would be a very good idea”. More representative, however, is David Holbrook, who thinks that the Falklands campaign was “a form if ‘useful hate’, forced upon us by circumstances”, or Arnold Wesker who, after eight points of qualification, makes point nine, that “The Task Force had to be sent”, and point ten, that:

I’m driven to the desperate and uncomfortable conclusion that depressing and tragic though it is for the price paid, the task force have no alternative but to fight on until occupying Argentine forces surrender (p. 107).

The painful dilemma which so many of these writers seem to be suffering, between dislike of destruction and acceptance of a global system of competition rooted in violence, is being solved by them at the moment by suspending their dislike for destruction.