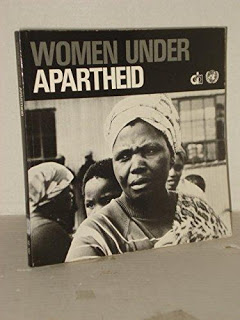 This book is published by the International Defence and Aid Fund for Southern Africa—an organisation opposed to racial oppression—in co-operation with the United Nations Centre Against Apartheid. It consists of some 100 photographs from an exhibition commissioned by the UN. accompanied by a sketchy analysis of apartheid and its manifold consequences chiefly from the perspective of black women, and an account of their bitter and protracted struggle against the system from 1913 onwards.

At the heart of apartheid is the migrant labour system, a consequence of the government’s policy of “separate development”; the territorial division of South Africa into a developed “white” area comprising 87 per cent of the land, and the various tribal homelands or bantustans to which the African 70 per cent of the population belong. Roughly two-thirds of the 9½ million Africans in white South Africa are migrant labourers on annual contracts; the remaining one-third qualify for the right to reside in black townships or “locations” under the stringent conditions laid down in section 10 of the Urban Areas Act.

Influx control is the means whereby the system is maintained, ensuring an adequate supply of cheap labour. Those “economically superfluous” to the requirements of the white area are denied entry or are “re-located” to a homeland called their “country” to which they may never have been before. Indeed, since 1948 over 3 million Africans have been forcibly removed in this fashion and dumped in the homelands, compounding the desperate poverty there.

This basic pattern of black existence applies with particular force to women. More women (6.1m) than men (5.2m) live in the homelands since male migrants cannot take their families with them. As a result broken marriages and desertion are common and it is chiefly the women who bear the cost.

Sexually discriminatory laws deny women any right to land, though government appointed chiefs may allocate them areas for use. With overcrowding and poverty intensifying, increasing numbers of women are being forced off the land and into the migrant labour system. Like the men they are accommodated either in single quarters belonging to their employers or single sex, barrack-like hostels into which they cannot bring husbands, boy-friends or children.

As a group, black women earn considerably less than even the low wages paid to black men. For the most part they work as domestic servants for white women. According to the author Hilda Bernstein, after childbirth “the primary role of a white woman becomes that of consumer and living display, through leisure and adornment, of her husband’s wealth”, and the possession of a domestic or two enables them to fulfil this role.

Black women are discriminated against by residential laws in many ways. For example, the stipulation in the Urban Areas Act that the right to reside in an urban area is dependent on whether one has worked for a single employer in the area continuously for at least ten years, or lived in the area continuously for at least 15 years, works against women who stay with their parents in rural areas for the birth of their babies. Neither can women be registered as tenants in townships or stay in urban areas if widowed or divorced.

Some of the photographs are particularly poignant. An old woman in socks sitting against a wall mending her skirt with gnarled hands; another prostrate on the ground beside her scanty belongings, waiting for a train to some settlement camp. On the other hand, the picture of a crowd of black demonstrators bearing posters “WE STAND BY OUR LEADERS” certainly won’t arouse sympathy in any socialist; indeed, one of the failings of movements such as the ANC is its elitist outlook. Apart from anything else, the existence of a hierarchical structure enables the authorities swiftly to immobilise protest by arresting its leaders. A rigorously democratic organisation would be much the stronger for not having to rely on “leaders”.

Finally, the book fails to discuss the sort of society which the struggle against apartheid seeks to bring about. It also tends towards generalisation and exaggeration and serves to obscure understanding of the structure of present society. An example is the statement that “through the apartheid system the wealth and resources are controlled by the ruling white minority”. This is not true. There are black capitalists and impoverished white workers, as well as white capitalists and black workers. Anyone who imagines that changing the colour of the ruling class will make a significant difference to the lot of black workers need look no further than the various despotic regimes of the homelands, such as Matanzima’s Transkei or Sebe’s Ciskei, which flaunt their corrupt opulence in the face of black starvation.