Book Review: In the trenches 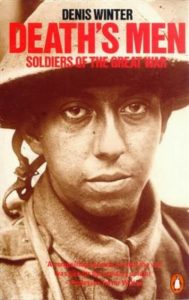 It is November 11, 1979. The Queen has just laid the wreath for the Unknown Warrior at the Cenotaph to commemorate “Our Glorious Dead”. The bands have played God Save the Queen and the flags have been saluted.

Glorious! You’ve got to be joking!

From August 1914 to December 1915 the voluntary enlistment amounted to about 100,000 a month. By the autumn of 1915, fifty-four million posters had been issued, eight million letters sent and twelve thousand recruiting meetings organised. One recruiting sergeant wrote in the Whitby Gazette “I’ve talked to twenty fellows this morning. Not one of them has any intention of enlisting . . . others told me to mind my own business”. And this despite the fact that poverty was so widespread that men were often much better off in the army on a shilling a day than in their civilian jobs. Winter quotes the case of Harry Winter (no relation) a clerk in Hackney on 15 shillings (75p) a week. With his army pay-off, his firm’s allowance of five shillings (25p) and his uniform and ration allowances of 18/1d (90p), he was actually receiving more than double his peacetime pay.

The bovine stupidity of the army commanders was out of this world. On joining his regiment the recruit received 11 weeks “basic training” which had nothing to do with the war at all. Its purpose was to “instill discipline”. Disobeying orders resulted in bread and water in solitary confinement, loss of pay and leave and field punishments Nos 1, 2 or 3—lashed to a gun carriage wheel for so many hours.

The army regulations were substantially the same as those drafted by Wellington for the Spanish campaign. The bayonet drill, charging a sack of straw and sticking a 15-inch bayonet into it was a relic of the times when an infantryman might be attacked by horsemen. It was a defence against cavalry and part of the British army tradition from the Colonial wars in Africa and India, Bayonet inflicted wounds in the Great War were .03 per cent of all casualties.

Most of the High Command were cavalry officers from the colonial campaigns—French and Haig from the North West Frontier in India and Kitchener from the Sudan. They regarded motor engines and aircraft with grave suspicion, revelling in the memory of the Charge of the Light Brigade. One General said he had “little time for machine guns”. They were military Luddites, dumbfounded when men and horses were mown down like ripe corn by the accurate German machine gun fire.

“Life” in the trenches was utterly unspeakable. The soldiers were soaked to the skin in three feet of bloody mud, sniped at and bombarded, frozen stiff in winter, harassed by the rats living off the stinking corpses, infested by lice and plagued by flies in summer. Trench fever was rife. During the two or three weeks of front line duty, soldiers were often unable to remove their clothing or boots. They subsisted on a diet unfit for a diseased dog—bullybeef, stale biscuits and plum jam; supplemented by a revolting mess known as “gype”, which consisted of a mixture of tealeaves, cocoa, sugar and soup in hot water.

Officers above the rank of major were seldom seen in the front line, prompting Sassoon to write:

If I were bald and fat and short of breath

I’d live with scarlet majors at the base

And speed glum heroes up the line to death

You’d see me with my puffy, petulant face.

Officers’ pay was ten times that of privates. They could spend their more frequent leaves in towns where privates could not afford to go, even if allowed to. And after all this—for those lucky enough to get back home—what was the glorious Hero’s reward? Full disablement pension for a permanently incapable invalid was 25/- (£1.25) a week. Soldiers with one arm missing at the shoulder received 16/- (80p) weekly; above the elbow 14/- (70p); below the elbow 11/6d (57p); a left arm was paid 1/- (5p less). Legs were similarly assessed.

Denis Winter rightly says that the books on the war were written by poets, journalists, politicians and, above all, Generals trying to explain away their crime. Robert Graves, J. B. Priestley, Harold Macmillan and Rudyard Kipling to name but a few. The impression is left that the great mass of common soldiers just didn’t think at all. But Winter has tried to find out what “Other Ranks” felt about it all. He frequently refers to the simple triviality of their gripes and complaints—such things as whether the rations had arrived, how soon they would be relieved in the line and so on.

The Socialist Party of Great Britain, with the advantage of historical knowledge was able to issue its 1914 Anti-War Declaration, calling on the workers of all countries to unite against the war. But this appeal fell largely on deaf ears and those who made it were scattered to the ends of the earth or locked up in Wormwood Scrubs. So, predictably, in 1939 it all happened again. During the last war there were 66,000 conscientious objectors. This war was for “Democracy”, so it was hardly politic to suppress public meetings at which Socialists denounced war, especially as the meetings grew larger as each war went by.

In 1911 the hand grenade lobbed by human muscle power was the infantry-man’s weapon. Today the old fashioned foot-slogger, the Poor Bloody Infantry, has practically ceased to exist. Artillery barrages, flinging huge quantities of metal, are already obsolete. In 1917 guns were set every six yards, delivering 4¾ tons of steel per yard of enemy front line. Today a missile launch pad capable of hurling nuclear warheads to destroy whole cities are stationed throughout the world and fitted to submarines at sea. The technical difference is greater than that between the Roman invasion of Britain and the Battle of the Somme.

Despite all the appeals to “never let it happen again”, both Russia and America are perfectly capable of using their terrifying powers to destroy much of humanity should their interests demand it. Nuclear war can happen if workers continue to ignore the Socialist appeal of 1914:

Having no quarrel with the working class of any country, we extend to our fellow-workers of all lands the expression of our goodwill and Socialist fraternity and pledge ourselves to work for the overthrow of capitalism and the triumph of Socialism.