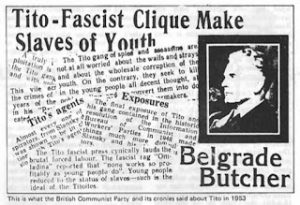 Having carried out many purges in the cause of Stalinism, Tito now carried out others in the cause of anti-Stalinism. Opponents were executed or jailed. Twelve thousand Yugoslav Stalinists found themselves in prison on the Adriatic island of Goli Otok. At the same time the other Balkan states, under Russian instructions, rooted out and put on trial any members who the Russians felt might follow Tito’s example, and declare their independence of Stalin. Executions of so-called Titoists became common throughout the remaining Stalinist countries of eastern Europe.
But Tito himself survived, and after Stalin’s death his successor Khruschev visited Yugoslavia to explain that it had all been a mistake. Thereafter Tito played a cunning game, allowing both superpowers, Russia and America, to woo Yugoslavia with economic and military aid. He also tried to create a “third world” bloc under his own leadership, independent of both Russia and America. In all things, he defended and promoted Yugoslav capitalism.
He claimed that capitalism in Yugoslavia was socialism; a good propaganda line to persuade the oppressed and exploited that they are really free. Tito himself saw the facts clearly enough, when his own interests were not involved, and he himself described the Russian system as state-capitalism. But honesty in capitalist societies is often available for export only.
Tito’s dictatorship remained as tyrannical as he felt necessary for the prolongation of his own power and his state-capitalist system, and he continued until the end to put opponents in jail, such as his former comrade Djilas, or to have them killed. In 1971 he purged the Croatian party leadership for “nationalism”, and followed it with a purge of the Serbian party leadership for “liberalism”. Dissidents who fled abroad were pursued by the Yugoslav secret police. The Times (29.4.80) reluctantly referred to the accusations of Yugoslavia “arranging the murder of Croat emigres”, and thus drew an indignant letter from a reader with a Serbian surname (Pavlowitch) reminding the editor (6.5.80) that “the list of murdered Serbs is also most impressive: at least one in Paris, three in Brussels, two in Canada, two in the United States, one in Stockholm and one in West Germany, the last one Dusan Sedlar, on April 16 in Munich. Not to mention the known cases of kidnapping, one in Switzerland and one in Rumania”.
As political boss of an autocratic country Tito was not dissimilar to others of the same kind. (And over eighty per cent of the world’s population is in the grip of dictators: capitalism breeds them, as a dead rat breeds maggots.) While his opponents were fitted with prison garb, or their winding sheets, Tito sported flashy uniforms and diamond rings, and his hat always had more gold braid than anyone else’s. While those who differed from him were incarcerated in their cells, or their graves, Tito was driving expensive fast cars, or was out shooting game. While those who had not been spry enough to change sides at exactly the right moment stared through the barred windows, if they were that lucky, Tito amused himself in luxurious speed boats, cruising round his island of Brioni. While those who held incorrect opinions forced down prison food, or themselves fed the worms, this large-bellied bon vivant savoured the succulent delicacies of state banquets.
And the great majority of the Yugoslav people, drudging in workshops and factories, and on the farms and railways, accepted it all os being part of the natural order of things. Since they supported capitalism, they were brainwashed by Tito’s propaganda machine into hero-worship of “the leader”. Turning out in their thousands to Tito’s funeral ceremonies, they demonstrated their own political ignorance, just as so recently the loyal crowds in Iran turned out to support the Shah, or in Uganda to support Amin. In a socialist—a sane—society people will find it difficult to understand how such a blood-stained monster as Tito was ever allowed house-room by human beings—much less permitted to lord it over an entire country as a dictator.
Alwyn Edgar