A leaflet published by Islington Branch for distribution to cinema audiences at the film. “Scum 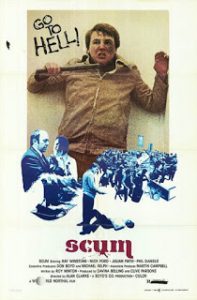 “SCUM”—THE NEED FOR A POLITICAL RESPONSE
The film you have just watched depicts the institutionalised brutality which is an inseparable part of the British state machine. The original version was banned as a television play by the ‘authorities of the BBC because it was thought to be too one-sided to be shown to a mass audience. If the BBC employed similar editorial standards in the Nine o’clock News we might treat their claim to neutrality as having some meaning. In fact, it is the conscious intention of the media to “entertain” us with the likes of Starsky and Hutch and Porridge rather than let us see progammes which will set us thinking about the kind of society’ in which we live.
Having come out of the cinema, aware of what goes on in the name of justice and order, you may conclude that something has to be done. Willie Whitelaw and the Short Sharp Shock Brigade believe that something should be done: they say that those who step out of line should meet with even worse forms of punishment. They justify, in the name of Discipline, the incarceration of inarticulate people who express their anger in acts of violence, mentally retarded people who fall foul of the law and can’t be accommodated in overcrowded psychiatric institutions, people found in the possession of cannabis in what is supposed to be a free society. Such offenders are locked up, humiliated and depersonalised for having the audacity to be born into a society which cannot provide for their human needs. Those who advocate law and order really mean violence in the defence of the.present order; they mean the legal retention of the status quo in which 10 per cent of the population own approximately 90 per cent of accumulated wealth.
Probably most people who watch Scum will not be of the “hang ‘em and flog ’em” mentality. They will be concerned and distressed by what they see. They will be outraged by the brutality which is being tolerated. They will be moved by a sense of hostility to authoritarianism and disregard for human dignity. These feelings are understandable, but liberal sentiments have never solved the problems facing us all. Some may look towards legislative reform to solve the problem—but that, at best can only lead to ‘improved’ borstals, not the abolition of the crime and punishment system itself. But it is clear from the film that it is not how you lock people up, but that you lock them up which is the inhumane act. Some may criticise the borstal system on moral grounds, claiming that it is un-Christian and that if only those in power knew what was happening they would put a stop to it. In fact, the penal system is quite in line with the cruelty and imposed discipline of Christianity, as was shown in the film by the Christian borstal governor. Neither is it true that those in power would be willing to eradicate the conditions and attitudes portrayed in the film. Their main concern is that the working class should stay in line and produce profits for them; if a few of us step out of line we can expect no sympathy from the mighty rulers who depend upon our consent for their power.
Prison and borstal are part of the entire inhibiting structure of the capitalist system. Prisons and borstals exist all over the world, including the so-called socialist countries, because capitalism prevails worldwide. Where there is capitalism there are two classes: those who own and control the means of producing and distributing wealth and the majority who produce but do not own the wealth. The legal system—laws, police, courts, prisons, borstals, armies—exist to protect the position of the minority against the majority. As long as this system lasts, so will the violence of the state. The only positive political response is for the majority us to gain control of the state machine for the purpose of abolishing the capitalist system. The only response to the crimes of the state is democratic political revolution. The Socialist Party of Great Britain stands without compromise for Socialist Revolution.
We want a society without laws, without police, without prisons and borstals. We want a society of rational human co-operation. We want a society of common ownership and democratic control of the world around us. Don’t just walk away from Scum feeling indignant and powerless. Put your indignation to a positive use by joining with us in the work of building support for the principles of Socialism.
Islington Branch