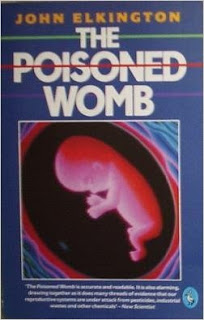 This book sets out to describe the dangers to health and, in particular, the health of future generations that drugs, radiation, pollution and pesticides pose as a result of the increasing use of toxic substances which damage reproductive capabilities or cause mutations.

The author, a prolific writer on environmental problems, has collected an impressive amount of evidence to illustrate the ecological disasters which have occurred because of the need to make a profit under capitalism.

Infertility, miscarriages and congenital diseases have always occurred and the interplay of factors causing them make it difficult to prove that individual substances are harmful. But as the author points out, in the USA in the late 1950s about 2 per cent of newborn babies had some physical, mental or learning defect compared with about 4 per cent today (p. 18) and research carried out at Florida State University showed that by the late 1980s some 20 per cent of American males could be functionally sterile, compared with only 0.5 per cent in 1938. when scientifically sound sperm counts began, (p.48)

The different methods used in the analyses of pollutants and contaminants and the problems and limitations of the tests employed are described in interesting, though sometimes technical, detail in chapter one.

Chemical poisoning is not a new problem however. The ancient Romans suffered from lead poisoning due to the extensive use of lead drinking vessels and Napoleon suffered a number of symptoms as a result of arsenical contamination of the wallpaper in his room at St. Helena.

Multinational firms have, in many instances, ignored safety regulations, falsified research records of dangerous substances and been socially irresponsible in the search for increased profits. At least 5,000 children were born with deformities of the limbs by 1961 because their mothers had taken the drug thalidomide during pregnancy. The drug had been distributed by Distillers under the trade name of Distival in spite of the fact that Dr. George Somers, Distillers’ pharmacologist, found in 1959 that a liquid preparation of thalidomide was definitely toxic. He tried to get Distillers to publish his findings but the company chose to keep them secret, (p. 101)

In 1976 the James river in Virginia had to be closed because of contamination from the manufacture of the insecticide Kepone by Life Science Products. Workers at the plant were found to be working in an environment where Kepone dust was several centimetres deep, and a number of workers suffered from severe headaches and tremors and some were found to be sterile. An investigation showed that a pollution control system had not been implemented because it would have affected profitability

It is claimed that the damage can cause to reproductive systems has led to discrimination against women in the workplace. In 1979 five women opted for sterilisation to keep their jobs with Cyanamid Corporation. USA. The resulting controversy, although acrimonious, was by no means new: at the beginning of this century women were banned from working in the heavy lead-using trades in Britain because of research carried out at Guy’s Medical School. The fact that lead may have been equally toxic to the fertile male worker was not considered and it is consistent with capitalism’s priorities that it is more profitable to exclude certain categories of workers than make industrial processes safer.

Under capitalism profits can be made from any misfortune:

The Xytex Corporation . . . is aiming to publish a thriving market in human sperm: it sends out frozen sperm by mail order to doctors carrying out artificial insemination, supplying catalogues listing donors with details of their ethnic origin, height, weight, hair and eye colour, skin colour and blood group, (p.64)

John Elkington has provided many examples of the way in which the drive for profits harms workers’ health without drawing clear political conclusions and the book ends rather lamely by stating more people are concerned with environmental issues. Even when political statements are made:

Such problems cut right across political frontiers, as it forcefully illustrated by recent experiences in Siberia. The rapid development of the region’s natural resources has resulted in soaring birth defects and worker-mortality rates, (p.20)

Elkington misses the point that problems in the state-capitalist countries are caused by their integration into the capitalist system. Although this book provides a lot of useful information it does not offer a solution to the present system. Readers looking for a socialist alternative to capitalism’s nightmare will have to look elsewhere.