Marx made an original contribution to economic theory that has been little noticed and less appreciated. He provided a measure of productivity based on his labour theory of value. As most economists rejected this theory, it was to be expected that they would not see its relevance to productivity.
The concept is a simple one. If at first it requires the labour of 100 workers to produce 1,000 articles, and later it becomes possible for them to raise output to 1,100 articles, their productivity will have increased by 10 per cent. Who could possibly deny so obvious a proposition? Yet most of the people who discuss productivity either reject it or fail to understand what it means. This is partly because of confusion about what constitutes ‘production’. In everyday language a motor car is said to be ‘produced’ by the workers who assemble it, and bread to be ‘produced’ by workers in the bakehouse; but the labour of these workers is only a part of all that required to produce cars and bread. As Marx put it: “We must add to the quantity of labour last employed the quantity of labour previously worked up in the raw material of the commodity, and the labour bestowed on the implements, tools, machinery and buildings with which such labour is assisted.” (Value, Price and Profit, chapter VI).
Let us assume that the ‘previous’ hours of labour needed to produce a commodity are 80, and the ‘last’ hours are 20 – a total of 100 hours. Let us further assume that without additional investment, but merely by simplifying the last operation, it becomes possible to reduce the necessary hours from 20 to 10. It then takes only 90 hours in all, in place of 100. Productivity will have risen by about 11 per cent. But if ‘productivity’ is calculated — wrongly — on the last operation only, it will appear to have increased by 100 per cent. Would anyone be so foolish as to look at it in that way? Well, yes — it is happening every day. A news item about the introduction of a new machine operated by two men instead of the former ten will be presented as ‘two men do the work of ten’, as if the making and maintenance of the machine did not absorb additional labour. So productivity in that example will be said, wrongly, to have been multiplied by five. When a very costly automated plant was introduced in America, it was reported as ‘one worker operating the new equipment produces as much goods as 100 or more workers produced before’.
As Marx explained, the amount of labour that is saved is not the whole saving on the last operating process, but the difference between that amount and the additional labour required for the new equipment (Capital, Vol.I. Kerr Edition, pp.426-7). This is the true measure of increased productivity.
Mistaken Theories
The mistaken theories have been responsible for a continuous enormous exaggeration of the increase of workers’ output, and corresponding false assumptions about the growth of unemployment.
Ironically Marx, before he had worked out his labour theory of value, fell into the trap. He accepted as if it was true a statement by Proudhon that each worker in 1840 produced 27 times as much as in 1770 (Poverty of Philosophy, p.108). In fact, the increase of output was not, as Marx said, 2,700 per cent, but perhaps 100 per cent.
In our own day the Labour Party was responsible for the fantastic statement that ‘‘the application of scientific knowledge and the revolution in the methods of production … has raised productivity a thousandfold.” (Towards World Plenty, 1952). In 1952 the real increase through and since the industrial revolution was perhaps tenfold.
The consequence has been that every advance in technology – the steam engine, the internal combustion engine, computers and automation – and now the silicon chip – has given rise to prophecies that enormous numbers of workers would soon be out of work permanently.
In 1963 an American conference on automation and full employment declared: “We can … in the next decade learn to produce all the goods we need in the US with 2 per cent of the working population.” This would have meant that by 1973 98 per cent would be unemployed – in the event it was actually about 6 per cent.
Alongside this, in every one of the score or so depressions of the last two hundred years there have been forecasters who held that the decline of sales would be permanent – the market would never expand again.
This, however, was not Marx’s view. He held that through new markets and the more intensive exploitation of old ones, expansion would in due course be resumed. And in fact, after each depression total production and sales have risen to higher levels than before.
In 1886, after Marx’s death, Engels said that Marx’s view no longer applied. On the basis of quite fallacious assumptions about the increase of productivity, he announced his theory of ‘permanent and chronic depression’. The market, he said, would not grow fast enough, and unemployment (then 10 percent) would go on growing year by year. A few years later it was down to 2 per cent, and Engels returned to Marx’s view.
Kautsky went further and said that the European market would not grow at all but would shrink. Actually, British capitalism’s market (the quantities produced and sold) is about five times as large as in 1886, and the number of jobs has doubled.
The idea of the ‘limited market’ has persisted. It was argued in 1922 by J.A. Hobson in his Economics of Unemployment and turns up again in a new CIS Report on the New Technology: “There is no expanding economy to cushion the blow and reabsorb \wrkers in new growth areas.” 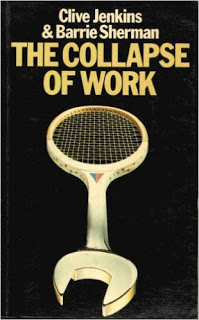 It is also the theme in The Collapse of Work by Clive Jenkins and Barrie Sherman (Eyre Methuen, £3.50). Jenkins and Sherman say that capitalism is not going to operate in future in the way it has always operated in the past. But to prove this it is necessary to show that some neu factor has emerged, something which alters the economic laws of capitalism.