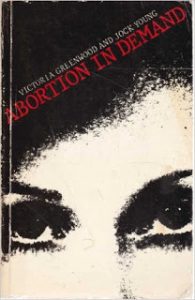 Abortion in Demand by Victoria Greenwood and Jock Young. Pluto Press, £1.65.
This book gives an account of the attitudes and aims of both supporters and opponents of the 1967 Abortion Act and the James White Amendment Bill 1975. There is The Society for the Protection of the Unborn Child (SPUCC) which is opposed to abortion except in a tiny minority of medical cases. In contrast the National Abortion Campaign (NAC) stands for abortion on demand. Less clear cut is the attitude of those who are in general agreement with the spirit of the 1967 Act. These, termed by Greenwood and Young the “reformers”, are divided into progressives who feel the Act only needs some administrative adjustments, and others like James White who consider the spirit of he Act to have been violated and want it severely amended.
The chapters which deal with the history of abortion law reform in Britain are informative. The same cannot be said of the confused views of V. Greenwood and J. Young. They are in favour of women having control over their own fertility and recognize the need for a fundamental transformation in society to make real freedom possible. That they do not define the transformation is significant. Anything beyond making the kind of strategic demand likely to have mass appeal is dismissed as utopian. The Abortion Law Reform Association is rebuked for concentrating on a single issue and for “pressure group politics” — seeking change through legislation. To prevent the dwindling of support that can happen when an issue is no longer topical they suggest that the campaign or abortion should be linked with other demands thus giving a wider perspective. The Working Women’s Charter — 1976 — is approved as giving a suitably broad basis from which to work. (11 points of the charter include “right of women to work”, “national minimum wage”, “free state-financed community-controlled child care facilities”, “child benefits . . .  £5 per child”; p. 137). This series of linked demands “provides a basis for women to make a real choice whether to have a child or not. We are not told how most of these aims are to be realised — if not through Parliament.
The issue of abortion law reform illustrates the dilemma facing all reformists including NAC supporters. There is the need for legislation which is precise enough to solve the problem in the manner intended. Most of those women who benefited from the 1967 Act were single, or married with fewer than 3 children. “As it turned out abortion was not the solution to problems of poverty, overcrowding and deprivation; it was more frequently a choice available to ‘normal’ women with whom the Act was not concerned” (p.34). In a postscript (on the first Report of Select Committee on Abortion) the authors point out that only abortion on demand will cater for the “most exploited group of women”. But as they are also aware, gaining the right to choose abortion would give “merely a freedom in a situation of limited alternatives” (p.127).
Socialists are frequently told of social ills which “cannot wait” for Socialism, by opponents who are prepared to spend decades on their campaigns. “The 1967 Act was the end result of thirty years’ concerted reformist politics”, p.15. V. Greenwood and J. Young recognize the limitations of reforms yet still urge the support of reformist campaigns. Demands, even wider based demands, made by those who know that a fundamental change in the social system is the only solution are still reformist. And they effectively delay that solution.
Pat Deutz