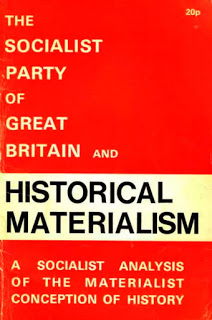 The Socialist Party of Great Britain and Historical Materialism — A Socialist Analysis of the Materialist Conception of History. Published by the SPGB. 20p.
At last we have this eagerly awaited pamphlet. It is a definitive statement which explodes all the confusion surrounding Marx’s teachings on history. Sprinkled with examples from Roman, feudal and modern times, it is concise but authoritative — a textbook on history in itself.
But it is more than that. Once and for all the “mystery” created by terminology has been ended: Dialectics, Idealism, Materialism, Mind and Matter, Thought and Deed, Theory and Practice. Dialectics is clearly explained as simply the ancient Greek word for evolution — the expression for looking at things developing.
How much ink and paper has been spent on purporting to explain the Marxian dialectic but, in fact, “justifying” the unprincipled opportunism of this or that reformist party. None more so than the Leninist Bolsheviks, who claimed the sole copyright of dialectics, appointing themselves the high priests of this mystic cult:

Only the Communists apply the dialectic-materialist teachings of Marx and Engels in the spirit of their founders.

L. Rudas, Dialectical Materialism and the Social Democracy (translated from the German edition).

How many unfortunate workers—members of the CP (and its Trotskyite splinters) have had their poor skulls cracked by trying to understand the jargon-ridden interpretations of “only the Communists”! Stalin, “Lenin’s best pupil”, physically exterminated the Bolshevik Old Guard in the holy name of “dialectics”. Socialism became state-capitalism; capitalist profit became socialist profit; freedom, tyranny; democracy, dictatorship.
Voting for the capitalist Labour Party? Pacts with Nazi Germany? Strike-breaking in support of imperialist wars? Calling left right? Making wrong right? “It’s all in the dialectics, comrade! It’s dialectical contradiction, see?”
With this pamphlet, the game is up. Workers who read it can no longer have wool pulled over their eyes by Palme Dutt and other professional twisters with pseudo-Marxist rigmarole. Even the Bolsheviks were constrained to pour scorn on the naive Chinese who published theses on “the dialectics of hairdressing”, and the Hungarians who dropped the centre- forward of the state football team “for not applying the correct Marxist-Leninist dialectic on the football field” (i.e. not scoring enough goals).
Let all those who have been bemused by the highfalutin phrase-mongering take heart. The clear and definite answers are in this little book. The materialist conception of history is expounded with clarity and simplicity, without detracting from the immense sweep and profundity of Marx’s theory.
Human history is neatly marshalled and lucidly explained. In addition, the pamphlet carries two invaluable appendices. First, a comprehensive set of references to works before Marx, expounding previous rational theories of history. Second, a reprint of the essential statements by Marx and Engels on historical materialism.
A new and deadly weapon has been forced for the Socialist armoury.
Horatio.