Book Review: The Politics of Confrontation 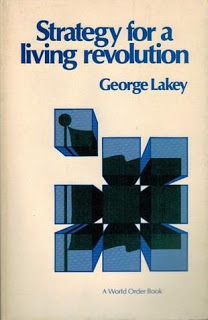 The Socialist case is a clear and logical one but its advancement is held back by muddling and incorrect ideas constantly pumped at the workers through the media and books such as this one. Purporting to show us the way to a fundamentally different kind of society it in fact shows us the confusion that exists in the author’s mind. Whilst it is true that the book is well intentioned we must remember that the road to Hell is paved with good intentions.
Lakey, a “prominent Quaker activist”, paints an exotic picture of Eastern promise but his “Living Revolution” turns out to consist of many of those misconceptions which the Socialist Party has spent nearly 70 years discrediting. According to Lakey, in striving for a more “egalitarian society” we must make “people mobilise their own power for confrontation with the status quo . . . defy the police”. We must make “propaganda of the deed” by “mass dilemma demonstrations” and boycotting of “social institutions . . . reactionary schools and churches”, and go in for a policy of “mass non-cooperation” (all non-violently) until the constant crises caused by this action will in turn cause the “dissolution of the old value system”, and hey presto! we get our new society.
However, this terminology does not hide from the Socialist that after “non-violent transnational” revolution has taken place there remains the hideous skeleton of capitalism. Lakey does not question the fundamental relationship of capitalism, i.e. that of wage labour and capital and the fact that the vast majority of the population have to sell their labour-power to the tiny handful of those that own capital, and thereby the means whereby other men must live. Lakey’s ideas are a hotchpotch of the left-winger, the pacifist and of course the eternal reformer. The kind of campaigns he advocates “are largely built around specific concrete demands”. (Anti-racial-discriminations, protests, etc.)
Socialism will not and cannot be brought about by confrontations or non co-operation of any kind but only by the working class taking conscious and political action to achieve it. As for confronting the powers of the State — non-violently or otherwise — few things could more quickly lead to cynicism and possibly the spilling of workers’ blood. Nor will any amount of crises topple capitalism; it will always struggle back just so long as the workers continue to allow it to do so, which they do actively by voting for the capitalist parties or passively by default. Lakey’s constant references to the “socialist countries” (Russia, China etc.) are completely misleading as Socialism cannot exist in one country. Just as capitalism today is the international society dominant in all countries of the world it follows that when it is replaced by Socialism this too must be on a world-wide basis.
As for reforming capitalism, the Socialist recognizes that any attempt to knock the rough edges off capitalism will not only fail in solving any basic social problem but will sidetrack the workers from the real path for their emancipation—Socialism. The SPGB has the only “concrete demand” that really matters: ABOLITION OF THE WAGES SYSTEM.
Tony D’Arcy