Book Review: What is class? 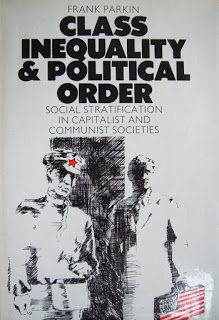 £2.25.)
Parkin defines class by occupation and status, and divides western capitalist society into two classes: manual and non-manual workers, or the “working class” and the “middle class”. The latter he describes also as the dominant, and relatively privileged, class and the former as the subordinate, and “disprivileged”, class.
This won’t do since it includes the mass of ordinary white-collar workers amongst the privileged. They may enjoy more fringe benefits at work than industrial workers, but their overall standard of living is not all that different.
Class is more realistically defined by reference to where people stand in relation to control over the means of wealth production. An analysis of society, in Russia as well as the West, reveals a definite group which, as a group, has exclusive control over the use of the means of production. The great majority of people, whatever their occupation or social status, face this group as sellers of their mental and physical energies. This is where the dominant/subordinate, privileged/disprivileged dividing line runs. The two classes in society are the owners and the non-owners, the capitalists and the workers. The middle class is a myth most of whose alleged members are really in the working class.
Parkin himself has to abandon the absurd view that ordinary white-collar workers are members of the dominant, privileged class when he comes to discuss the attempts of Labour and Communist governments to improve the lot of manual workers.
He argues that the kind of reforms Labour governments have brought in—more educational chances and State welfare benefits for manual workers—have been those which have also benefited the dominant class, “or many influential sections within it”:

Without too much exaggeration we could in fact say that whether or not socialist approaches to equality become politically acceptable depends on whether or not they confer advantages on the dominant class, or at least an important section of it” (Our emphasis; he means “Labour” not “socialist”, of course).

But who are these important and influential sections if not the property-owning capitalists? For how do ordinary white-collar workers benefit from a less discontented, better trained and more healthy industrial workforce?
With regard to Russia and east Europe (which he also calls “socialist” although noting that some regard it as “state capitalist”), Parkin sympathises with the “new class” theory expounded by the former Yugoslav Vice-President Djilas. He notes that in these countries ordinary white-collar workers are, if anything, slightly worse off than skilled manual workers and suggests that the dominant, privileged class are the top industrial and political executives. Summarising Djilas’ view, he finds that as a group the “new class” has features in common, not with his “middle class”, but with the property-owning capitalists!

Djilas . . . argued that the class based on the Communist Party enjoyed virtually the same rights over property as a traditional bourgeoisie. If ownership is defined as rights over the use and products of collective property, and not simply legal entitlement, then the dominant class of socialist society can be conceived of as a propertied class. In this sense it has the same exploitative status as its capitalist counterpart; both enjoy a materially privileged position based upon expropriation of the surplus value created by the subordinate class. If, then, we replace the legal definition of ownership with a sociological one, the similarity between a classic bourgeoisie and the ‘new class’ of socialist society is thrown into high relief.

It is because we take what Parkin calls a “sociological” view of ownership that we say that the ruling class in Russia is a capitalist class. By the same token, the dominant class in the West are the capitalists, not those in white-collar jobs.
We drew attention to Parkin’s inadequate theory of class in the Socialist Standard for December 1968 in a review of his book on CND.
Adam Buick