Civilization. A Personal View, by Kenneth Clark. BBC and John 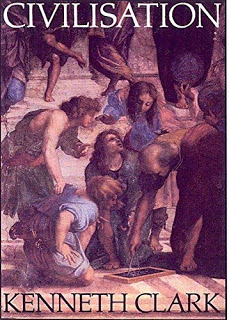 Murray. £2.25 (paperback).
Discussing man’s transition from dependence on nature to dominion over it, Marx, more than a century ago, gave us a description of civilisation which could have been written yesterday. “Work no longer seems to be included in the production process as man rather stands apart from the production process as its regulator and guardian . . .  In this transformation it is less the immediate labour performed by man himself, or the time that he works, than the appropriation of his general productivity, his comprehension of nature and dominion over it through his existence as a social body . . . that appears as the supporting pillar of production and wealth.” It must be a great pity that Kenneth Clark was not familiar with this passage, as it could easily have set his personal view of civilisation in a more purposeful mould than the philosopher-seeking-after-truth image, which we have here.
Millions of people will recall with pleasure, and no doubt considerable enlightenment, the television epic (a composition in a lofty narrative style) from the script of which this book is compiled. While the author stays in his own field, art, there is no doubt that he knows what he is talking about. When he discourses on the exquisite delights of Michelangelo’s statue of a young man he called “David’’ then, certainly, those who may have cultivated a taste for this sort of thing, will think him well worth listening to; but when he ventures into the realm of political economy, the mask of the truth-seeking philosopher is liable to slip and reveal a sometimes appallingly ignorant prejudice.
Obviously this is most clearly seen when we get to the Industrial Revolution and matters with which we are all. perforce, familiar. It is easy to seize on incorrect details, particularly in one’s own pet subject, and use them to berate an opponent, but it does not need a very profound knowledge of what went on in England in the first half of the 19th century to expose this author’s treatment of the period.
Surely every schoolboy knows today, thanks however indirectly to Marx and Engels, that the sanctimonious Wilberforce got the money to campaign against chattel slavery by sending equally helpless wage slaves, aged about ten, down the mine to get a gutfull of coal dust. Kenneth Clark may like to give us the impression that he has read Engels’ Condition of the Working Class in England in 1844 but he shows little evidence of having absorbed any of its lessons in economics; if he had he might have got the title of the book right: among knowledgeable people there is a difference between ‘working class’ and ‘working classes’. Furthermore somebody could have corrected the index error, which has been allowed to persist from the earlier, more expensive, edition. Surely after reading this book nobody could be quite so pathetically eulogistic about the “humane reformers” of the period, nor could he possibly have the breathtaking effrontery to describe the penetrating observation, painstaking research and devastating comment of Engels’ book as “the passionate cry of a young social worker”.
In the story of this period we are also treated to a brief, incredibly brief, reference to Marx. There is no direct comment on his work nor even the suggestion of an argument, but he is there alright, wedged between some more “humane” stuff about Lord Shaftesbury and a few lines of poetry by Wordsworth, who, we are told solemnly, knew all about the workers before Marx even heard of them. Here again it seems unfortunate that Kenneth Clark should suppose that his readers are not familiar with the doings of Lord Shaftesbury. Marx, when dealing with this man, didn’t treat us like a lot of simpletons who can be told any old rubbish, so why should Kenneth Clark? He only had to take a few lines after the Ten Hours Bill, and all that stuff, to tell us that this “great humanitarian” was also a grasping landowner, who helped to provoke the Swing riots by, among other oppressions, taking from the miserable wages of his labourers, exorbitant rents for the hovels they lived in.
Kenneth Clark, almost with the very last sentence of the thousands of words comprising this work, aims an utterly mindless aside at Marx asserting his “moral and intellectual failure”. Perhaps he should read over his own comments on the first half of the 19th century and think again about that one.
F. T. G.