Society of the Future, by August Bebel. Progress Publishers. Moscow. 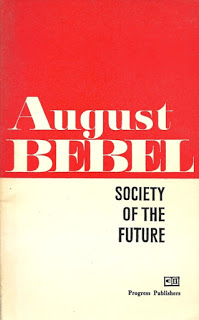 To mark their government’s false claim to be in the process of establishing “Communism” in Russia by the 1980s a Russian State publishing house has brought out under this title an edited version of Bebel’s Woman under Socialism.
Bebel speculates on the possibilities of Socialism (which he sees as an international, Stateless, moneyless society based on the common ownership of the means of production) and produces evidence to show that the productive forces were sufficiently developed, even in 1910, to go over to Socialism.
Bebel was a Social Democrat and the Russian editor is forced to disown precisely those of his views which we in the Socialist Party of Great Britain endorse, namely, his refusal to distinguish between “Socialism” and “Communism”; his conclusion that the abolition of capitalism necessarily involves the immediate disappearance of the State and of money; and his belief in the “more or less simultaneous triumph of the socialist revolution in all or most capitalist countries”. The Preface where the editor tries to explain away the undeniable fact that Bebel, unlike Lenin but like Marx, understood Socialism to be a moneyless, Stateless world society rather than the kind of national state capitalism that exists in Russia has to be read to be believed.
Our criticisms of Bebel, apart from his role as one of the leaders of the German Social Democratic Party who tried to disguise its reformist practice with revolutionary phrases, would be somewhat different. He here follows Marx and speaks of labour-time vouchers as the substitute for money and some of his ideas on education and sex now seem dated. All the same, this work is a useful addition to the range of old pamphlets now available.
Adam Buick