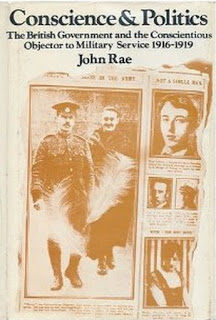 Conscience and Politics, by John Rae. Oxford University Press. £3.50.
Two earlier books on the objectors of the first world war were written from a sympathetic standpoint. They were John Graham’s Conscription and Conscience, 1922, and David Boulton’s Objection Overruled which was reviewed in these columns in August 1967. The present work, by Dr. John Rae, Headmaster of Westminster School, though it covers some of the same ground, has a different approach and contains much information not in the other works. Dr. Rae has had access to official documents and other materials not open to the earlier writers.
Rae sets out to describe the stupidities and confusion surrounding the handling of the objectors and offers as explanation that the authorities did not know the kind of people they were dealing with, had made no attempt beforehand to plan what they were going to do, and had in fact drifted, without forethought, into this situation just as they drifted into conscription itself. Asquith’s government had entered the war believing that it would be fought (and quickly won) by the kind of professional army that had served in the past. Because conscription was traditionally unpopular the Asquith government stood by the policy of voluntary enlistment though, in the view of the military people who were counting on a long all-out war and needed control of civilian as well as military man-power, the early flood of recruits was not only largely irrelevant but a positive embarrassment because the War Office “had neither the personnel nor the equipment to undertake their training.” But when voluntary recruitment (which of course had included large numbers pushed into offering themselves by various kinds of pressure) began to fall off, the advocates of conscription gained ground. Asquith had been forced to accept a coalition in May 1915 and by the end of the year it was clear that conscription was going to be introduced. It was prefaced by some adroit playing-off of different groups of workers against each other — the volunteers and their families against the civilians, single men against married, and so on. (The interested reader is referred to the SOCIALIST STANDARD April 1916 on how this was done.)
Chapter two of the book describes the hasty and ill-conceived drafting of the Military Service Act 1916 and the equally hasty inclusion of a conscience clause to placate the opposition. According to Rae the earliest date on which the decision to insert such a clause was reached was 1 January 1916, “which left just three days in which to draft effective legal provisions for conscientious objectors”. What the government did was to borrow a clause from the Australian Defence Act of 1910, modified by using the term “conscientious objection” contained in the British Vaccination Act of 1898. Asquith resisted military pressure to restrict the definition formally to religious objectors but the two military men (Macready and Childs) who became responsible for all conscientious objectors under military jurisdiction were bitter opponents of the concession and never gave up their opposition to the political and other nonreligious objectors.
Among the problems to which the authorities had given no thought were how conscientious objection was to be proved, what work was to be done by those who were willing to work, and what was to happen to those who refused to give military service or do civilian work but whose claim to be recognised as conscientious objectors had been turned down. They were still wrestling with these problems when the war ended. Their last blow against the objectors after the war was to deprive many of them of the vote until 1926.
Anyone who knew the conscientious objectors or who reads this book will not be surprised that the authorities in the first world war were baffled by the strange variety of religious and other views with which they had to deal. In an appendix, Rae lists, along with 42 political objectors and 1050 the nature of whose objection “was not stated”, 43 different groups. (The number covered by this list was 3964 so that it represented only about a quarter of the total of objectors.)
The biggest single group in this list was the Christadelphians who did not object to assisting in the successful prosecution of the war but objected only to coming under the military authorities.
Rae has this to say on some of the other sects:

. . . the applicants from the Church of Christ, Devise’s Church, Dependent Coklers, and the Peculiar People, expressed an objection primarily in terms of a literal reading of selected biblical texts. Muggletonians and Christian Israelites, though literal biblicists, were more likely to base their objections on their expectations of an early advent of Jesus Christ. A desire to be ‘separate from the multitude’ and to reject secular and political life inspired the Sandemanian objectors.

If the variety of beliefs baffled the authorities it also presented problems to the objectors in their mutual relationships. There were inevitable clashes of views between the different political groups and between them and the religious objectors. It would be unsafe to generalise but certainly in some prisons and camps the religious groups, other than the Quakers, kept themselves very much to themselves and there was sometimes considerable friction. However in some places they managed to live together well enough. In one camp, when a strike was organised and religious objectors refused to join in, one of their influential spokesmen won them over to the strike by meeting one biblical quotation “Render unto Caesar that which is Caesar’s” with another, “The labourer is worthy of his hire”. Just like the “relativity” pay claims of today the strike was sparked off by the news that the “pocket-money” pay of objectors in some other camps was a few pence per day higher.
Rae finds the ILP and the No Conscription Fellowship the main source of political objectors though he has a footnote about smaller groups of objectors “from the Socialist Labour Party, Socialist Party of Great Britain, Industrial Workers of the World”. He lists the SOCIALIST STANDARD as one of his sources of information.
This book makes interesting reading. Among other things it explains why, made wiser by the lessons of the first world war, the authorities were able to handle much larger numbers of conscientious objectors in the second world war, so much more smoothly.
Edgar Hardcastle