Freedom and Necessity: An Introduction to the Study of Society. Joan Robinson. (Allen and Unwin. 128 pages. 12/-.) 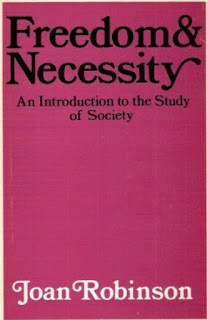 comes up to her disarming claim that it is “intended to provoke inquiry rather than to give information”, but as its conclusion is to hold China as a model for the future of mankind that is not good enough. Professor Robinson sees Mao’s China through rose-tinted spectacles but makes no attempt to back up her claims with solid information or to answer the many criticisms of whose existence she cannot be unaware.

She covers an enormous range of subjects, starting with social groups in the animal kingdom and sweeping through tribal society, feudalism and capitalism, the Russian Revolution and finally Maoist China. Her particular claim is that “Chinese socialism is something new in the world.”

The Czech reformers claimed to establish socialism with a human face. The Chinese have set out on the more ambitious course of establishing economic development with a human sense of values.

She then tells us that we shall have to wait twenty years to see “Whether or not humanity is capable of carrying out such a programme.” Professor Robinson is well aware that exactly the same claims about human values were made by the capitalists who overthrew feudalism, by the Russian Communist party in 1917, and by Labour governments with their so-called “welfare state”. Socialists did not have to wait twenty years to know that these were bound to be empty claims; socialists had the advantage of understanding the basic difference between capitalism and Socialism and of knowing that the state capitalism that Lenin proclaimed as the next step in Russia and that the Labour Party wants in Britain is not Socialism. Professor Robinson shows no such understanding: when she talks of Socialism it is state capitalism she means. For her Russia, as well as China, is “socialist”. She makes no attempt to consider the proposition that the human values she seeks are unattainable except in socialist society as conceived by Marx and the Socialist Party of Groat Britain.

She realises however that she has to show China as being, in some way, different from Russia. She makes many references to the “mistakes” of the Russian government and its tyranny and cruelties, but how is China basically different? For example, in Chapter Eleven (“Another Way”) she describes how China has tried to solve its agricultural problems, but it reads exactly like a Communist Party description of Russia’s agricultural policies, including all the familiar features: state farms, collectives, and peasant holdings. In Russia these policies were imposed on the resisting peasants forcibly and brutally. Professor Robinson admits that the Chinese peasant outlook (as in Russia) “did not fit in with the ideals of socialism”, but she blandly tells us that the Chinese peasants “agree” with what the government does to them and accept it “with goodwill”. She gives no evidence for this. She might tell us if the Chinese government allows peasants (and workers) freely to make their own decisions and form their own political parties to further them, and if not why not.

When the Conservative M.P., Sir Fitzroy McLean, went to China in 1963 he said that he found there the same kind of inequalities and privilege that he found when he visited Russia. He wrote:

In China, as elsewhere, how you live and what you buy depends on how much money you have. And who, it will be asked, has the money? The answer, as in the Soviet Union is: the privileged classes, officials, high-ranking officers, scientists, technicians, skilled workers and so on. But there must be added a small and peculiarly Chinese category: the Chinese capitalists. These, surprisingly enough, are the former owners of, for example, factories, whose enterprises have been taken over by the State and who receive annually from the State as compensation a percentage of the capital value of the enterprise. As they are also very often employed as managers of the factories, some of them are extremely well off.
(Sunday Times, 9 Oct. 1963)

Colette Modiano, the French woman courier in charge of a group of Western visitors to China in 1969, gave a similar account and instanced a manager in whose house they stayed receiving £13,000 a year as interest on the capital value of his business taken over in 1956. (Sunday Express, 28 Sept. 1969.) Does Professor Robinson ask us to believe that lop-paid Chinese peasants and workers approved of these privileged incomes, or indeed, were ever consulted about them?

Professor Robinson does not offer to explain the “human values” of Chinese armaments, including those weapons of mass destruction, the hydrogen bombs which the Chinese government claims it is now perfecting.

Among a number of references to Marx is one concerned with population. Professor Robinson says that Marx was right to criticise Malthus about population, but “unfortunately he drew from this the conclusion that growing numbers are not a menace to well-being.” She holds Marx, at least partly, responsible for the Russian government’s “dogma that family planning is contrary to socialism”. She gives no evidence that Marx held such a view and it is in direct conflict with his own assertion that what he held to be the laws of population under capitalism had no application elsewhere: “every special historic mode of production has its own special law’s of population, historically valid within its limits alone. An abstract law of population exists for plants and animals only, and only in so far as man has not interfered with them.” Capital, Vol. I, Chap. XXV, Section 3.) Incidentally. Engels, during Marx’s lifetime, expressed the view that socialist society might find itself “obliged to regulate the production of human beings” (Quoted by Professor Lewis S. Feuer in Marx & Engels. Fontana Classics. (P. 32).

Professor Robinson’s book opens with a not-at-all original saying of Chairman Mao. She and other Mao admirers can now add to their collection of his sayings the most recent of all: he sent greetings to Queen Elizabeth II on her birthday!