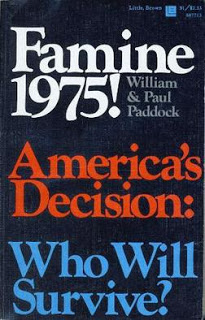 The authors, an agronomist and a retired State Department official, consider the threat of the most catastrophic famine in world history. While agriculture is now almost static in the undeveloped world, still falling death rales and continuing high birth rates — in some countries higher than had been thought physically possible — combine to produce enormous increases in population, such that already nearly half the people in undeveloped countries are under fifteen years old. Food production can be greatly increased in many ways: birth rates can be greatly reduced, as they have been in the unique case of Japan. But the authors claim that there is no prospect of this being achieved in time to avert prolonged famines involving billions of people. The situation is even more serious than the misleading official statistics indicate.
In the book, the capitalist system is accepted unquestioned, but most of the causes of the present situation can be ascribed to a world economic system not designed primarily to cater to human needs. For example. 95 per cent of world agricultural research expenditure is in the developed world (non-tropical soils). The results of this research cannot he applied in the undeveloped world (tropical soils).
From 1975 on, America will not be able to provide the required food to the “hungry nations” in addition to that needed for domestic and commercial use. It is assumed that Canada, Australia and Argentina will not provide any significant quantities. So say the authors cynically, the “hungry nations” must be divided into three categories: those to be abandoned as hopeless (India, Haiti, Egypt), those which will manage to survive without aid (Libya, Gambia), and those in between which should receive food (Tunisia, Pakistan).
The possession or lack of food supplies could replace that of nuclear weapons as the dominant factor in power politics. We should be glad for one mitigating factor in the chaos and misery of the coining decades, though: “The Time of Famines can be the catalyst for a period of American greatness”. This illustrates the depth of cynicism of the book which nevertheless contains some useful information.
S. D. S.