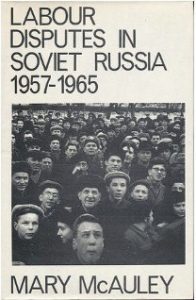 Like most books based on doctoral theses ‘Labour Disputes in Soviet Russia’ makes for rather dry reading. The masses of tedious details can be exasperating, but at the same time they do throw some light on the class struggle in Russia and the forms it assumes.

Mary McAuley spent eighteen months at the Labour Law Department of Leningrad University and this allowed her to study closely labour relations at a number of factories in the area. Particularly interesting are her accounts of some of the indignities which individual Russian workers, like workers throughout the world, find themselves subjected to. At the Karl Marx factory, for example, the shop superintendent cuts a worker’s premium by 5 per cent for going to wash before time, and at a different plant the same penalty is imposed on another because — having been given a day’s warning — she fails to report for work on a Sunday.

More amusing are the antics of various commentators who dismiss labour disputes in the Soviet Union as simply the result of such factors as “remnants of capitalist consciousness in individuals”. The very frequency with which they repeat these empty formulae hints at the scale of the struggles to improve their wages and working conditions which workers throughout Russia must be engaged in.