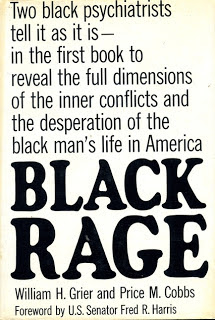 Hatred of blacks and belief in white supremacy are, say the authors, built into American culture. They are well aware that this racism is the legacy of slavery:

It was the economic usefulness of slavery in the period when cotton was king which in turn gave rise to the moral, religious, and psychological justification of the enslavement of blacks. Moral justification followed economic necessity and black Americans were viewed as sub-humans designed for labouring in the fields.

The American Negroes are of course not inferior to ‘whites’. Nor are they a ‘race’ (even in that term’s vague meaning). Some are not even black. They are a cultural group sharing a common tradition—of suffering and oppression. Brought to America as slaves to labour on the tobacco and then on the cotton plantations, when they were ‘freed’ in 1865 they became unskilled agricultural labourers. Now they form a section of the working class still mainly confined, because of discrimination, to unskilled jobs.

The authors’ theme is that this legacy of slavery has imposed on the Negroes a particular kind of indignity and mental cruelty. It has forced them to develop, or rather preserve, a slave mentality accepting the racist lie that they are inferior. Black rage, they suggest, is the reaction of Negroes who are beginning to realise the degrading confidence trick that has been pulled on them. Even so. what they are demanding is very modest—not that they be treated as human beings but only that they be treated as ordinary wage slaves rather than as freed chattel slaves.

The basic oppression and exploitation in America is that of the workers by the capitalists. However, as Marx pointed out, in a non-revolutionary time the ruling ideas in society are the ideas of the ruling class, shared by rulers and ruled alike. Racism was the ideology of the Southern slavocracy which has been inherited by the ruled of capitalist society long after the rulers whose idea it was have gone. Thus, the ‘whites’ too are the victims of racism, conned into accepting an outdated ruling-class idea.

Socialists urge Negro workers to reject the chattel-slave mentality that is imposed on them. Just as we urge white workers to cast off the outworn ideas of a former ruling class which only cause extra suffering for some of their fellow workers.