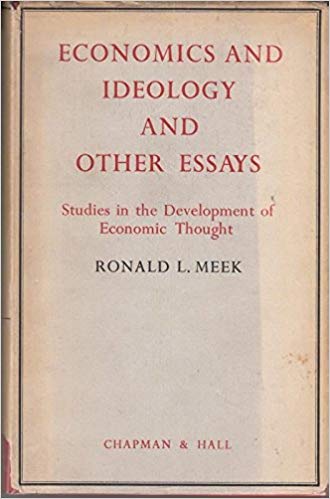 Economics and Ideology and Other Essays by Ronald L Meek, (Chapman and Hall, 40s.)

Meek’s essays were originally written over the past twenty years, during which he changed from an orthodox supporter of the so-called Communist Party to the more ordinary kind of reformist, believing that the tendencies Marx saw for capitalism can, and have been, overcome by “social legislation, trade union activity, State intervention, etc.” But he still thinks there is somewhere a “socialist sector of the world”.

Nevertheless, Meek knows his Adam Smith and Ricardo as well as his Marx. Classical Political Economy, on which Marx built, started its analysis from the relations men entered into when producing wealth and saw the distribution of the social product as between the classes of landowners, manufacturers and labourers. This led them to a labour theory of value. Meek, in his essay on the Scottish Historical School (of which Adam Smith was a member, for he was not just an economist) shows how they had evolved a materialist conception of history, similar to Marx’s, which saw productive and property relations as the basis of societies.

After Ricardo, by about 1830, bourgeois economic thinkers turned away from this approach and began to see economic activity from a businessman’s point of view. Why was this? Meek, following Marx, suggests that this was because the Ricardian labour theory of value implied that capitalism was based on the exploitation of the workers. This indeed was the conclusion drawn by men like Hodgskin and William Thompson. Marx ironed out the inconsistencies in their theories (chiefly by distinguishing between “labour” and “labour power”) and showed how the source of rent, interest and profit was the unpaid labour of the workers.

Meek claims that “it is obvious that the particular ‘laws of motion’ ” developed by Marx can no longer be used today as a guide to what is actually going to happen as capitalism develops further”. He takes these laws to be: the falling rate of profit, the increasing severity of cyclical crises, the concentration and centralization of capital, and the increasing misery of the working class. Only the third, he says, has been proved valid. However, it is open to question whether Marx expected the rate of profit to go on falling in practice (remember that it had been falling, and Marx was only trying to solve a problem which Adam Smith, Ricardo and others had already had a go at) and whether he even held that crises would get worse and worse (in any event this view has been rejected by Socialist Party of Great Britain). As for increasing misery, Meek argues that this means that the standard of living of workers would grow worse and worse. We cannot accept this and refer those interested to the discussion of the matter in the Socialist Standard of January 1957.

Though socialists cannot agree with all he writes. Meek is a Marx scholar worth reading.