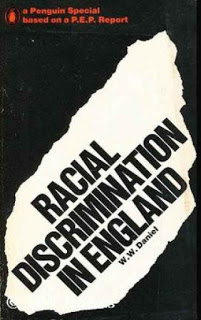 In April last year PEP released its report on racial discrimination in England, based on a survey of six areas carried out by Research Services Ltd. Research Services used three methods to assess the extent of discrimination, defined as “a practice or policy which affects members of a minority group differently because of colour or country of origin in ways that are of significance either socially or to them personally”. They interviewed immigrants (from West Indies, India, Pakistan and Cyprus) and persons in a position to discriminate (employers, landlords, estate agents, etc.) and. organised “validating situation tests” in which they sent a white man from England, an immigrant from Hungary and an immigrant from the West Indies to apply for the same job. room, or motor insurance. What was the conclusion of this thorough and objective survey, here written up by W. W. Daniel of Research Services?

In the sectors we studied—different aspects of employment, housing and the provision of services-there is racial discrimination varying, in.extent from the massive to the substantial.

In housing it exists in private letting, in house buying and even in council housing. This means that in all sectors of housing only the worst is available to coloured workers. You would expect migrants, and not only from overseas, to live at first in the worst areas but then in time to disperse. The effect of the informal colour bar in housing is to prevent this dispersal. And the racialists have the insolence to accuse coloured immigrants of creating slums! Some employers will only give coloured people unskilled labouring jobs; others provide separate eating and washing places; some operate a quota system. The trade unions, to their credit, have generally opposed discrimination.

What can be done about all this racial discrimination? Daniel rightly says that it will not be overcome as “an inevitable consequence of contact and of time”. If racial prejudice is to go it must be fought But how? Should the Socialist Party campaign with others opposed to racialism for laws against colour bar (useful as these might be educationally)? Should we support “black power”? Should we use “fists against the fascists?” None of these. Capitalism gives rise to working class problems and so to working class discontent and, as long as workers are not class conscious, they will remain open to suggestions that this or that conspicuous minority, not capitalism, is the cause of their problems. To give up our uncompromising struggle against capitalism for alliances with groups that openly or by implication support it would be shortsighted. For, in maintaining the system that gives rise to discontent we would be defeating our object—a world without racialism— and would indeed even be encouraging racialism. In the long run the only effective way of combatting racialism is by building up a strong, world-wide Socialist movement, and this demands uncompromising opposition to all pro-capitalist groups.