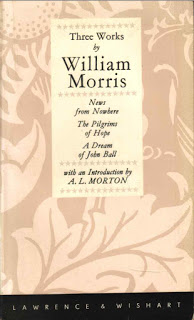 This paperback contains two of Morris’ important Socialist writings, both novels. A Dream of John Ball, applying the materialist conception of history, shows how an attempt at the time of the Peasants’ Revolt to establish a socialist society was doomed to failure. The establishment of Socialism had to be “the change beyond the change”. In other words, society had first to pass through the capitalist stage before Socialism became possible. Morris also well describes the horrors involved in the change from feudalism to capitalism (obviously based on a reading of Marx).

News from Nowhere is a genuine Utopian novel insofar as Utopia is the Greek for “no-place”. It is an account of what human relationships could be like (not necessarily what they would be like) in the future moneyless, classless society of Socialism. Morris is not concerned here with the technical basis of such a society and so scarcely mentions machines. This has been taken to mean that he was anti-machine. That Morris was against the use of machinery is a myth. Certainly he attacked the abuse of machinery in capitalist society with production geared to the market to make profits for the capitalists and machinery used to speed-up work and bore and degrade its operators. Morris knew that in a Socialist society, with production for human need, machinery would be used properly as its use would be under the democratic control of the community.

The third work is Morris’ narrative poem on the Paris Commune.

Unfortunately, there is an introduction by that well-known second-rate Communist Party historian, A. L. Morton. He sees the electrification policy of state-capitalist Russia as the implementation of News from Nowhere. He denounces Morris’ concern about the dangers of a Socialist organisation attracting non-socialist support and his suggestions for overcoming it as “sectarian” and “rigid anti-parliamentarianism” (not true, Morris always stood for political action). But you don’t have to read the introduction.