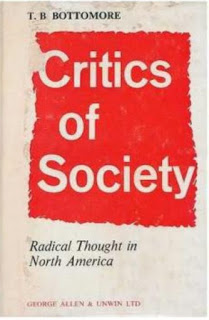 Critics of Society: Radical Thought in North America, by T. B. Bottomore. Allen and Unwin 25s.

Bottomore first broadcast this as a series of talks on Canadian radio. He points out that “the course taken by social criticism in North America was quite different from that in Europe, because the society itself was very different”. The original colonies were formed by European religious and political dissenters. Statements on the rights of man, incorporated in the Declaration of Independence and Constitution, contained some of the most radical 18th century ideas. Political democracy became established. Thus in American society at that time there were no great issues (slavery being the one exception), only individual grievances. As would be expected this situation did not give rise to any lasting school of criticism or reform movement.

After the Civil War there followed a period of immense industrial expansion. The mass immigration of the 1880’s began to supply the additional workers needed by industry. During the period from 1860 to 1910 the rural population of America doubled, but the town population increased almost sevenfold. These decades saw the inevitable rise of poverty, unemployment and other social problems. It was these social changes that led to a revival of social criticism, initially taking the form of Populism and similar movements. Symptomatic of this revival was the appearance of Henry George’s Progress and Poverty (1879) and Edward Bellamy’s Looking Backward (1888).

Bottomore examines the subsequent development of North American social criticism down to the mid-twentieth century. In a separate chapter on Canada he deals with the formation of the New Democratic Party in 1961. According to him:

“The New Democratic Party was founded with the support of socialist groups and trade unions. In the same year a new exposition of socialist ideas was published under the title Social Purpose for Canada.”

The NDP is not in fact a Socialist party. It was set up in opposition to the Socialist Party of Canada. No socialist groups took part in the formation of the NDP. Socialists would not, and did not, wish to be associated with the plans to patch up Canadian capitalism put forward in Social Purpose for Canada.

Of modern social criticism, Bottomore has this to say:

“Another way of describing the present nature of social criticism would be to say that the critics of whatever social order they are confronting no longer see one big social problem, for which there is one big solution. Instead, they see a succession of more or less unique situations, each of which requires the critic to take a moral stand, to commit himself, but only with respect to that particular situation. There is no rule for dealing with all situations. Our age, therefore, is certainly an age of criticism, but also of exceptional confusion and disarray.”

Socialists take the view that it is impossible to solve the major problems of modern society in isolation. The social problems from which the working class suffer all have their roots in the very basis of the capitalist system. They can only be solved when the workers rid themselves of the confusion they share with modern “social critics”, equip themselves with socialist knowledge and establish Socialism.